In 1980 a competition was held to design a flag for the city of Rochester. Nearly 200 flag proposal entries were submitted to the citizen flag selection committee. The design submitted by Laurie A. Muir, a fine arts student at the Minneapolis College of Art and Design, was selected for the official city flag by the Rochester City Council at a council meeting on June 16, 1980. Muir designed the flag with a white circle on a royal blue background, as a historical reference to the original Flag of Minnesota, which actually has a medium blue background. To represent the city's main industry, the flag design includes a city landscape in the background showing the main building of the Mayo Clinic, along with the Plummer Building, a U.S. National Historic Landmark. Another major employer, IBM is represented by a computer-styled font for the lettering. In the foreground is a blue lake representing Rochester's Silver Lake, an artificial lake in Rochester created by a dam and used to cool the electrical generating power plant. Because the power plant produces enough heat to keep the lake from freezing in the winter, Canada geese stay in Rochester year round. This is represented by the three Canada geese flying over the city on the flag. The first official flag was presented to its designer in a ceremony held at the Rochester Public Library on August 19, 1980. Making the presentation was City Council President Dick Postier and Mayor Chuck Hazama. The center image from the flag is currently used as a logo in various renditions by city departments.
Laurie Muir, 22 December 2007, wowapikagastudio

The emblem has a thin light brown circle, a wide white circle inside, a thin brown circle inside, a landscape inside: pale blue sky, buildings, lake and birds overhead. Blue field. The center emblem looks like a "seal", but it is not. The city has a different official seal. However, because it looks like a seal, some city departments have adopted it as a seal & it is used on city police cars.

Of course, the flag is rare, only the official city buildings and parks use it.
Lee Herold, 21 June 1997

On 26 Dec 2007 I checked with the city administration and they verified that the city seal, the globe laid flat, is the same as used since approx 1858 when the city was incorporated. It is used for all official documents. The center image from the flag is used as a logo in various renditions, not as an official seal. So there is a flag, a seal, and a logo for the city.
Lee Herold, 27 December 2007

Rochester has undertaken a flag contest. The website at https://www.rochesterflag.com/ reported that the contest was extended to 19 January 2018.
Vexi-Newsi, 9 December 2017 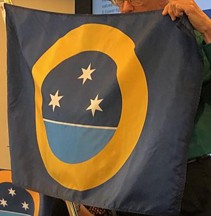 A group that has been working on a new design to replace the one adopted by the city in 1980 made a pitch to the City Council Monday to support its recommendation. But the council punted, leaving the group to promote its design without an official city endorsement. And group members at the meeting indicated they will. One of them is Lee Herald, owner of a local flag store who is expected to begin stocking the new flag.

The design presented to the council was favored by a judges board that was selected to pick a winner. It is called “Past, Present and Future” and was designed by Matt Levar of Rochester, NY. The city council was split on its feelings over a new flag. Members Hickey and Hruska favored the current flag, members Campion and Wojcik supported the new design and the other three indicated they wanted to hear from the public before making a decision. In the end, the council took no action but the group was encouraged by some members to begin selling the new design.

Here is a summary of the design:
Designer statement: This is a modern adaption of Rochester’s current flag, with the overt visuals replaced with meaningful symbols of the city’s Past, Present, and Future. Here, a gold ring encompasses the city, symbolizing the community’s unity and values. Inside, three stars, one for the city’s founding (lower left), one for the great tornado and the medical community that came from it (lower right), and the highest one for the city’s future. The stars shine in a night sky over the city’s South Fork Zumbro and Bear Creek Rivers.