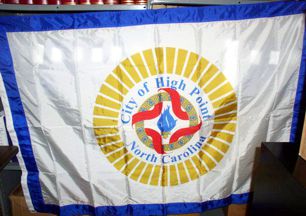 I found a description of the city flag of the City of High Point, North Carolina, USA.

"According to Harold Craven, who was mayor pro tem in 1969, he suggested to Council that a new city seal be designed. Council agreed and launched a citywide contest. An employee of Bennett Advertising submitted the winning design. See en.wikipedia.org/wiki/File:High_Point_Seal.jpg for image of seal.

According to the February 4, 1969, HIGH POINT ENTERPRISE, this description of the new city flag was given to the City Council that morning.

"In its colors, the flag begins with red, white and blue of the national standard; to them are added gold, for commerce, and brown, for one of the city's major industries. In the central design, a circle of carved wood, symbolizing the furniture industry, is intertwined with a red ribbon symbolizing textiles. Thus the city's two major industries, historically, are symbolically represented, but while they provide the framework for the city's growth, they are not the core of the city's being. Within them burns a blue flame, which represents the life of the spirit - religion, and the city's churches; knowledge, and the College, the city's schools, its libraries and other repositories of knowledge; and ------------------- (A portion of the clipping is missing. The clipping is in a scrapbook maintained in the N. C. Collection at the High Point Public Library.)

"Around this central design is a symbolic representation of the Old Plank Road, around which first a town and then a city grew; the planks on the flag are arranged in a sunburst, radiating power. In its colors and symbols, this flag carries on the classic tradition; in its design it is contemporary without being extreme; it represents both history and hopes; it is essentially timeless."
- from city website: www.high-point.net/150th/history.cfm.

Also, on the left is presented, as I read somewhere, proposed flag for 150 Anniversary celebration this year.