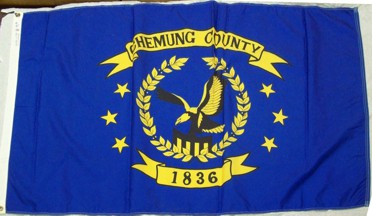 Blue field with yellow elements: a central emblem showing an eagle with outspread wings landing on - what? - surrounded by a laurel wreath, with a banderole proclaiming "CHEMUNG COUNTY" above and a similar one beneath mentioning "1836"; at left and right of the emblem, three five-pointed stars arranged in bows.

On June 12th, I was contacted by Ms. Rachel Dworkin, an archivist at the Chemung County Historical Society, replying to my email concerning the flag of Chemung County, New York. There is one in regular use, and one used for its sesquicentennial. Her response was incomplete, and I have contacted an additional person concerning the entirety of my questions. However, here is the information Ms. Dworkin provided me:

"Attached, please find two images of the current Chemung County flag. The flag was designed in 1973 by J. Arthur Kieffer who was the head of the County Department of Buildings and Grounds at the time. The flag was adopted by the Chemung County Legislature in 1974. Prior to that year, the County was run by a Board of Supervisors, but they were replaced by a 15-member legislature which was sworn in on January 1, 1974. They adopted the flag soon after although I am not sure of the exact date.

As for where the flag is flown, we have a flag on display in our museum and I believe it may be flown from the county court house, although I am not positive." 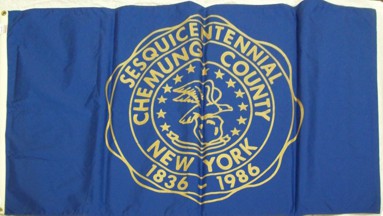 I don't know about any earlier flags, but a modified version of the current flag was issued in 1986 to celebrate the county's sesquicentennial. An image of that flag is provided.
Paul Bassinson, 4 July 2014