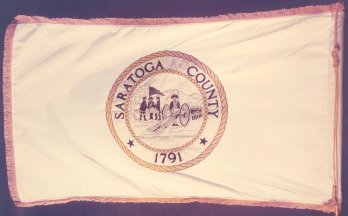 A caption on a black-and-white scan of the same image, again provided to me by the Saratoga County Historian Lauren K. Roberts, reads:
"Saratoga County flag first unveiled at the dedication of the new Saratoga County Infirmary, Ballston Spa, New York, on Sunday, November 5, 1972."

An official description of the history and the significance of the design of the county flag, again provided to me by the Saratoga County Historian Lauren K. Roberts, reads:
"Larry Gordon and John Stroll worked jointly on creating the artwork for the official flag of Saratoga County. The flag is predominantly white with a blue central circle that depicts the surrender at the Battles of Saratoga in the fall of 1777. Three of these flags were ordered by Larry Gordon around the year 1976 for the bicentennial. The flag was registered with the Secretary of State's Office as the official flag of Saratoga County. Three flags were ordered; two in satin and one in cotton which was used as a parade flag.

Sometime before the flag was finished, the artwork was changed from the artists' original intent. The flag depicts the traditional 'Betsy Ross' American Flag [sic] which consists of a circle of thirteen stars in the upper left corner of the surrender scene. This flag was not in existence at the time of the surrender and is therefore chronologically incorrect.

Also, sometime after the flag was made someone sewed 13 blue felt stars around the outside of the central circle. These stars were not part of the original flag design.

The 13 stars are not present in the photograph, for whatever reasons.

This variant of the Saratoga County, NY, has stars and seal scene are dark blue.
Jens Pattke, 25 June 2014 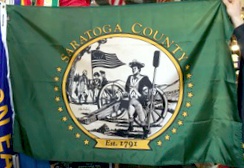