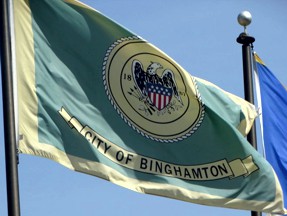 The flag is green, edged yellow with the seal centered.

A blue flag with a central emblem consisting of three dark green rings overlain by a flying eagle, on a light green oval, with a rising sun above it.