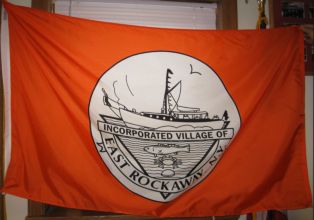 From the village's webpage at gcp.esub.net/cgi-bin/om_isapi.dll?clientID=75989&infobase=ea0899.nfo&softpage=Browse_Frame_pg42

There is also a very grainy b&w drawing of the flag there- it lets one see the placement of the wording and the circle, but not much else. The Village's homepage is at www.villageofeastrockaway.org/

The flag of the Village of East Rockaway, New York, is orange with black-and-white version of the village seal on it.

About the village:
"East Rockaway is a village in Nassau County, New York in the United States. The population was 10,414 at the 2000 census. The Incorporated Village of East Rockaway is in the Town of Hempstead, adjacent to Lynbrook, Hewlett and Oceanside." - from Wikipedia: en.wikipedia.org/wiki/East_Rockaway,_New_York.
Valentin Poposki, 12 November 2009