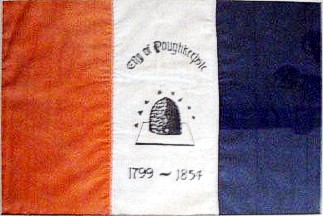 The flag of the City of Poughkeepsie is a red (or orange?)-white-blue vertical triband with city name (and seal?) on the white stripe. Photos: cityofpoughkeepsie.com/art/mayor.JPEG
Dov Gutterman, 28 November 2002

According to en.wikipedia.org/wiki/Poughkeepsie,_New_York, the Town of Poughkeepsie became an incorporated village in 1799. The City of Poughkeepsie was chartered in 1854.
Rob Raeside, 16 December 2012

Times Union have on their website a photograph of the burial of a Poughkeepsie police officer who was killed in the line of duty (www.timesunion.com/local/slideshow/Poughkeepsie-police-officer-shot-2933.php#photo-593884). The flag is visible, although the upper half is folded over, but the lower part clearly shows two short blocks of text side by side, as the two years would show. Together with the upper part of the flag visible behind the erstwhile mayor at web.archive.org/web/20031014133747/cityofpoughkeepsie.com/art/mayor.JPEG, we can confirm all but the emblem in the centre of the flag. It does indeed seem likely that Vanja's image is the flag of the City of Poughkeepsie.
Peter Hans van den Muijzenberg, 18 February 2013