The Town of Shelter Island, Suffolk County, NY, is the town seal on a white field. A portion of the flag is visible at www.newsday.com/media/photo/2003-07/8811334.jpg [no longer available]. It is the third one from the left- "helter is" is visible on the reverse portion of the seal's outer ring which is not covered by other flags. The seal can be seen at www.shelter-island.org/town_logo.jpg.
Ned Smith, 17 August 2005

Another news photo available on the web gave a much fuller view of the flag. At www.sireporter.com/news-articles/1646/1646-Island-aquifer-gets-good-report-from-county-hydrogeologist%E2%80%A9.html?ID=2522 it could be seen fully extended in the background. As already stated, it is composed of the town seal on a white field.
Ned Smith, 29 August 2010 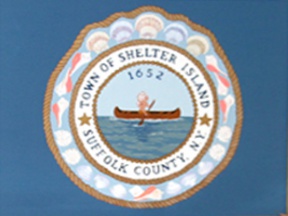