Description of the 1994 flag

Wikipedia shows a b&w drawing of what it purports is the city flag of Syracuse NY at en.wikipedia.org. This has a large logo with the Mayor's name underneath. The logo is rectangular on its lower portion, and semi-circular on the upper portion. It has been reproduced on many other websites. But I am suspicious about this claim. In addition to the unlikelihood of the city putting its mayor's name on the flag, and having to change it with every change in administration, I am doubtful of this flag for another reason. A photo at www.syracuse.ny.us/images/content/mayor.jpg shows the Mayor of Syracuse in front of a white flag with a blue & gold circular emblem which looks as if it is the city seal. I think that this is much more likely to be the official flag of the city.
Ned Smith, 17 September 2005

The city does have a flag as partly shown here in the Mayor's biography on the city website: www.syracuse.ny.us. The flag is white with a city seal in black and gold. While not listed in the U.S. City flag survey, Syracuse does have a flag. Hopefully someone can locate more information. My recent emails to the mayors office on the issue have been unanswered.
Ben Cahoon, 7 June 2008

It looks like the current flag is light blue-white-light blue in 3 horizontal stripes with the official city seal centered on the white stripe.  The white stripe looks to be twice as wide as the light-blue ones. The seal looks like the 1885/1974 seal with the white areas done in gold. Syracuse city seal details: en.wikipedia.org/wiki/Seal_of_City_of_Syracuse.
Ben Cahoon, 27 May 2010

I received several photos of the Syracuse city flag in high resolution. They all (except one) show the seal without smoke, and that's the one that I received in b/w version in PDF. The one photo of the flag outdoors shows the flag with a coloured seal (I mean in full color, not yellow-black).
Valentin Poposki, 9 June 2010 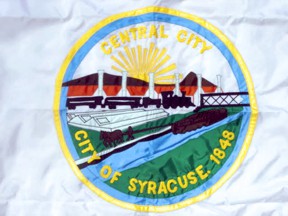 This seal is also prominently featured in an image at https://www.facebook.com/StephanieAMiner.
Paul Bassinson, 22 May 2016 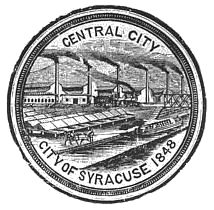 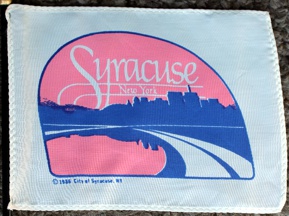 I bought this flag of Syracuse, New York from a seller in Redding, CA several years ago. It is quite different from the ones described above. The white tag attached to the staff says "Manufactured under License from the City of Syracuse".
Clayton Horner, 15 August 2016

The seal on the flag Clayton found is described on the Wikipedia pages about the city's former seals as having been adopted in 1986 by Mayor Thomas Young replacing the 'updated' seal of 1974 (which no longer had smoke being emitted from the smokestacks from 1885 seal). The 1986 city seal lasted as official city seal until 1994 when the next mayor re-adopted the 1974 seal while keeping the 1986 seal for tourism and economic development purposes. My guess is this one is from 1986-1994.
en.wikipedia.org
Ben Cahoon, 17 August 2016

I am a member of the Syracuse Flag Committee, a citizen-led commission working on a public redesign process for the city flag of Syracuse, NY.

Together with people from all across the city and many different walks of life, we have spent the summer developing a design prospectus, submission form, timeline, and public engagement events which are is inclusive for the diverse groups of people who make up Syracuse.

The committee is still preparing finalized dates and materials for distribution, nevertheless if you would want to learn more about the initiative, you can check out our website, or you can send inquiries to the committee itself at flag@adaptcny.org, or the entity organizing this initiative, Adapt CNY at info@adaptcny.org.

An image of the flag of the Syracuse Police Department from https://www.facebook.com/SyracusePolice/photos/245378322183063 shows it is a blue flag with the badge centered on a white disk.
Paul Bassinson, 27 February 2021