After looking at a video on what appears to be an official (or semi-official) YouTube channel of the city of Troy, New York, I have the flag posted above. Below is a link to the flag, likely shown at Troy’s city hall, which shows a vertical tricolor flag with a red stripe, a white stripe, and another red stripe going from left to right with the city’s coat of arms in the middle: www.youtube.com.
Paul Bassinson, 1 April 2017

I lived in Troy in the mid-1990s, and never saw anything but the flag with the Uncle Sam hat being used. I have never seen (and cannot find on the Internet) any evidence of a Troy coat of arms.
Dave Fowler, 2 April 2017 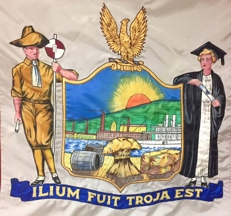 This is a tourism flag of the city of Troy, New York.
Source: www.facebook.com
Paul Bassinson, 14 December 2017

The flag of the city can be seen at www.troyny.gov/city_council.html which shows a large version hung on a wall. The flag is a vertical triband of red/white/red and has TROY, N.Y. and an emblem on the white stripe. The emblem looks like a seal, and has an Uncle Sam top hat on it. It may be the current seal of the city, but I cannot confirm that or find an image of the seal.
Ned Smith, 21 August 2005

Troy is the 'birthplace' of the "Uncle Sam" character. During the U.S. Civil War, a meatpacker in Troy shipped meat to the Union army, and the crates were stamped US for, of course, United States. The soldiers started to say that the meat came from 'our Uncle Sam.' And as they say, "the rest is history."
Terence Martin, 4 January 2006

The partial flag photo above is an anniversary flag - the flag with the coat of arms is the official city flag of Troy, New York. Found this website that tells about the flag and the coat of arms, the first two links. The first one shows the flag which I'm sending you and the second link shows the coat of arms which I'm also sending you, which can be found on this webpage https://www.reddit.com/r/Troy/comments/85ir61/til_troys_official_flag_and_coat_of_arms/
Paul Haines, 7 August 2022