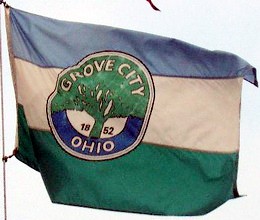 Blue-white-green horizontal tricolor with the seal showing a tree centered.

Grove City traces its beginnings to land grants bestowed upon Revolutionary War veterans General Daniel Morgan and Colonel William Washington. Hugh Grant, Jackson Township's first white settler, set up a farm on a portion of this land near the turn of the eighteenth century. In 1846, William Foster Breck purchased fifteen and a half acres from Grant's son. In 1852, Breck and a commission of three other men laid out Grove City. The community's growth was steady and in March 1866, Grove City became an incorporated village. The first mayoral election was held in May of that year; town doctor Joseph Bulen was elected.

As the twentieth century approached, Grove City solidified its position as a "bedroom community" of Columbus with the completion of the Grove City and Greenlawn Street Railway. Though this railway ceased operations in the late 1920s, proximity to Columbus continued to spur growth and the village became a city on November 16, 1959.