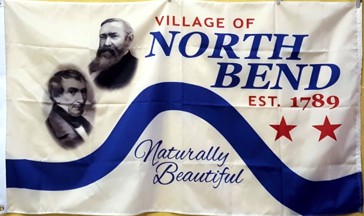 The two red stars must represent two North Bend-born politicians, who are portrayed on the flag:
- left, Thomas Andrews Hendricks (1819-1885), who served as the 21st Vice President of the United States (Democrat; March-November 1885);
- right, Benjamin Harrison (1833-1901), who served as the 23rd President of the United States (Republican; 1889-1893).
The blue curve represents river Ohio, here the border between Ohio and Kentucky. North Bend (858 inhabitants in 2012) is located on the northernmost side of the curve.

North Bend is the site of the William Henry Harrison Tomb State Memorial. William Henry Harrison (1773-1841; a grandfather of Benjamin Harrison) served as the 9th President of the United States (Whig) from 4 March to 4 April 1841. Harrison was the first president to die in office and this is still the shortest tenure.
Ivan Sache, 27 May 2019