Hamilton County raised its new flag at an event on Flag Day this past Friday. The event was held on the Courthouse steps and included a brief ceremony and the raising of the new Hamilton County flag by County Commissioners. The County is also displaying the other entries received, many of which came from local children, in the lobby of the County Administration Building (138 E. Court Street).

The County flag design was selected from 95 entries from local artists and students. The flag development process was a partnership between Hamilton County and ArtWorks, a local non-profit that provides training and opportunities in the arts for local youth. ArtWorks sought entries from local schools, the general public and its own network of local artists. A panel consisting of County officials, citizens, and ArtWorks staff helped select three finalists and the final design. The design was created by Justin Green of Oakley. The flag features a red "H", trimmed in green symbolizing Hamilton County. The H is encircled by an "O" representative of Ohio. Hamilton County's 12 townships are symbolized by the curves of the circular motif. The flag includes 37 stars representing the 21 cities and 16 villages of Hamilton County.

The flag was adopted on June 14, 2002. To the original design, twelve blue stars were added on the "cogs" at the request of County Auditor Dusty Rhodes, who said that townships also deserved stars. The county is named after Alexander Hamilton, the first U.S. Secretary of the Treasury. It was established in 1790.
Source: www.ohiochannel.org/your_state/ohio_statehouse/education/ohio_county_flags.cfm
Located by Valentin Poposki, 26 September 2007

The image above partly shows the flag of Hamilton County, Ohio (US). The last link on this page leads to a click-through list of Ohio county flags, Hamilton among them: www.ohiochannel.org/your_state/ohio_statehouse/education/ohio_county_flags.cfm?county_id=31. Our original image may be expanded, so to speak. Interestingly, this photo shows the flag without the little blue stars on the cogwheel: www.hamilton-co.org/Newsletter/Jun_19_2002/Flag%20Event%201.jpg, but then this is the original design, soon to be amended.
Jan Mertens, 20 May 2010 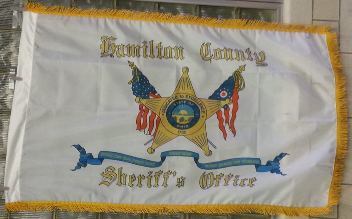 The Hamilton County Police Association was organized September 23, 1937, through the initiative and foresight of some of Hamilton County’s most progressive police officials. It was born of necessity, pointed out by the fact that most of those attending the initial organizational meeting were meeting each other for the first time. There was jealousy and friction between many adjacent political subdivisions, the cause of which was buried in history, but kept alive by political tradition. The first noble feature of the first drafting of the Association Constitution recognized this common need in this manner:


“This Association is formed for the primary purpose of promoting and bettering police work, to cultivate friendly and cooperative relations among law enforcement agencies, collecting and circulating valuable and useful information, to encourage enactment of laws, to further the benefits to the citizens, and to aid law enforcement officers in the apprehension, prosecution and conviction of law violators.”

This was adopted as Article III of the Constitution and is the foundation of the organization and the guide for all organizational
operation. Membership was originally limited to Mayors, Safety Directors, and Police. However, with success came a realization of these limitations and many related functional organizations are now eligible.

The Hamilton County Police Association was incorporated on 11 May 1944. This association now represents a combined force of approximately 1600 officers engaged in the different phases of law enforcement.
https://www.hcpaohio.org, HCPA website

The flag of Hamilton County Police Association is white with the association's emblem. 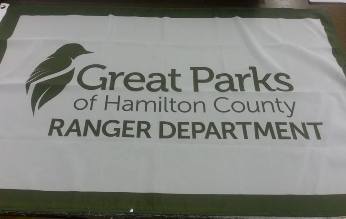