Although red and black flags with the UGA logo are ubiquitous, the official institutional flag is a red and black Canadian pale, with two variations of the university seal in the center in white.

One version of the flag shows a simple seal with date. Another shows it with a ring of stars: https://previews.agefotostock.com

University of Georgia - "The University of Georgia (UGA or Georgia) is a public land-grant research university with its main campus in Athens, Georgia. Founded in 1785, it is one of the oldest public universities in the United States. The flagship school of the University System of Georgia, it has been ranked by major institutional rankings among the best public universities in the United States. The university is classified among 'R1: Doctoral Universities – Very high research activity,' and as having 'more selective' undergraduate admissions, the most selective admissions category, while the ACT Assessment Student Report places UGA admissions in the 'Highly Selective' category, the highest classification. Among public universities, the University of Georgia is one of the nation's top three producers of Rhodes Scholars over the past two decades. In addition to the main campuses in Athens with their approximately 470 buildings, the university has two smaller campuses located in Tifton and Griffin. The university has two satellite campuses located in Atlanta and Lawrenceville.” Source: https://en.wikipedia.org/wiki/University_of_Georgia

In 1963 after becoming the Bulldogs' Head Football Coach, Vince Dooley redesigned the football uniform choosing a red helmet with a black "G" on a white background as the dominant feature of the new uniform for the 1964 season. He discussed with his staff that a forward-looking "G" would be an appropriate emblem for the helmet of the Georgia team. Dooley had just hired John Donaldson, former Georgia player from 1945 to 1948, as backfield coach. John was keen on the idea of a new image and volunteered his wife, Anne, who had a BFA in commercial art from UGA to design a logo for the new Georgia helmet with the general specifications Dooley had outlined. Dooley accepted Anne's original "G" which fit his vision for a forward look to Georgia's new emblem.

Since the Georgia "G"- though different in design and color- was similar to Green Bay's "G", Coach Dooley thought it best to clear the use of Georgia's new emblem with the NFL team. Athletic Director Joel Eaves called for permission which was granted. However, since its inception in 1961, the Green Bay "G" has been redesigned several times and now looks like Georgia's original 1964 "G." Georgia is proud that the Packers apparently liked the special nuances of the Bulldogs' forward-looking "G."

Georgia's oval "G", eventually replacing Georgia's old block "G" as the official UGA symbol, has stood the test of time. It made its first appearance in the opening game in 1964 and was an immediate hit with the Georgia fans, especially after Dooley's first three teams were so successful--highlighted by the 1966 SEC Championship.

The "G" logo is now a household mark of the University of Georgia and can be seen all over campus and on other sports uniforms besides the football team's helmets. Just like Michigan and Tennessee, this emblem has staying power and will be around for a very long time. This flag as well is produced in the thousands, usually sized 3x5 feet, and flown by Georgia fans everywhere. 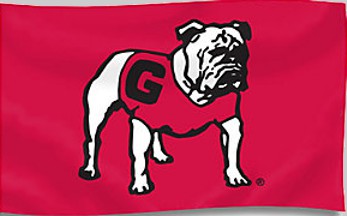 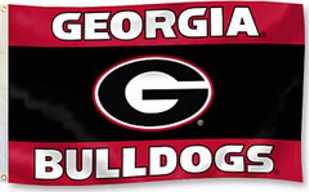 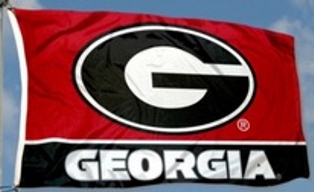 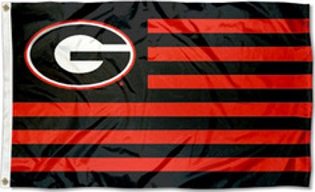 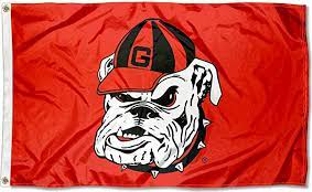 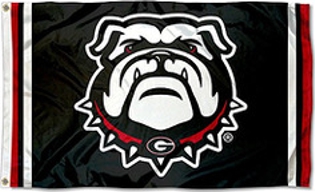 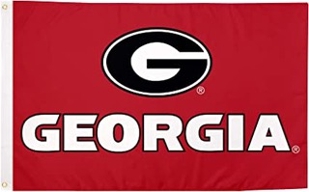 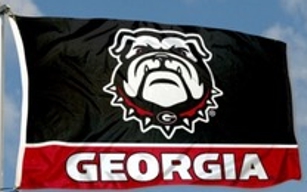 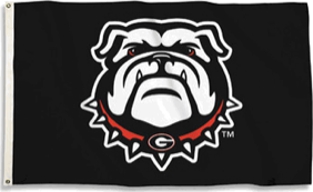 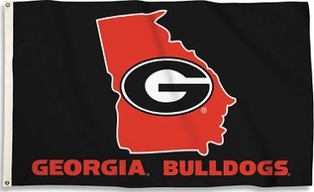