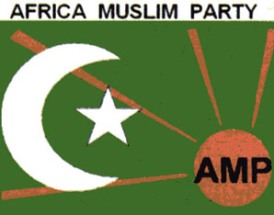 The Africa Muslim Party (AMP) was formed in 1994 in order to participate in South Africa's first democratic elections.  AMP believes in maximum powers to the people on the ground and regards the devolution powers from the centre to the provinces and communities as essential based on morality,  religious freedom, the abolition of poverty and hunger, improving the social environment in which the diverse beliefs, customs and languages are promoted.  The AMP promotes free and fair trading conditions, fighting nepotism and corruption and the provision of better education facilities, health care, housing and free services to the poor and needy.  AMP will promote adult education to increase literacy in the society and to promote small and medium size business and start up entrepreneurs in business that are beneficial to the majority of the people.  Finally, the AMP will fight racism and bigotry at all levels and promote tolerance and understanding.

The AMP logo has a green field with a white crescent moon and five point star in the hoist.  A tan coloured ball, from which four tan coloured rays radiate, is in the lower fly.  The letters AMP are superimposed in black over the ball and the full name of the party is written above.
image by Bruce Berry, 21 May 2009

The APC was formed in 2007 and had two seats in the National Assembly until April 2009. The APC is underpinned by the philosophies of:
1) Pan-Africanism - a socio-political world view which seeks to unify and uplift both native Africans and those of the African diasporas as part of a "global African community";
2) socialism - a socio-economic system in which property and the distribution of wealth are subject to control by the community; and
3) African Nationalism and continental unity. The APC stands for one unified Africa.

The APC uses the same colours of black, green and gold as does the African National Congress and Pan-African Congress parties. The party's logo is in the form of a circle divided horizontally with the top half showing a yellow rising sun against a green background. The lower half has the party initials in black against a white background.
Bruce Berry, 11 May 2009 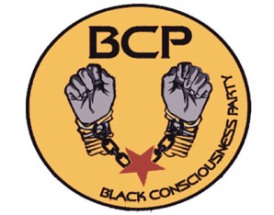 The Black Consciousness Party (BCP) was launched on 13 September 2008 in Pretoria after the commemoration of the brutal killing of its founder Bantu Steven Biko by the apartheid regime in 1977.  The BCP has close ties with the Azanian People’s Organization (AZAPO) and according to party officials, will work together in the 2009 elections. The BCP only contested the provincial elections in Limpopo.
Bruce Berry, 29 June 2009

The Economic Freedom Movement is a new libertarian political party in South Africa. Its emblem, in the form of  a green, purple and yellow flower can be found this website.
Gary Selikow, 17 Dec 2003

The Great Kongress of South Africa (GKSA) was launched in 2007 in Soweto and according to its leader, Vinesh Chuturgoon, it has 150 000 members. The party is aiming for 26 seats in the National Parliament in the current election. Its leader previously served as chairperson of the Inkatha Freedom Party's executive committee and as a Ward Councillor of Ward 4 in Newcastle (KwaZulu-Natal).

GKSA strongly believes in socialism and its motto is 'equality for all'. According to the party, its main aim is to fight crime and ensure that the youth participate in various empowerment programmes.

The GKSA logo takes the form of a wavy flag comprising three horizontal stripes of yellow, white and green with part of the name of the party, "GREAT KONGRESS", in the centre of the white stripe. On the national ballot the words "of SA" are written under the logo.
Bruce Berry, 03 May 2009 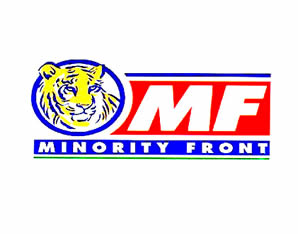 Although the Minority Front (MF) claims to represent all the minorities of South Africa, its support comes almost entirely from South Africa's Indian community in Kwazulu-Natal. The party stands for the absence of discrimination and inequality with regard to minority groups and co-operation between races. The party is headed by Amichand Rajbansi, a former Chief Minister of the House of Delegates tricameral parliamentary chamber for Indians in the pre-1994 political dispensation. The MF had two seats in the National Assembly and is also represented in the eThekwini Metropolitan Council in Durban.

The party logo has a stylised head of a Bengal Tiger followed by the letters "MF" in white on a red stripe, with the full name of the party in white on a blue stripe below, underneath all of which is a thin green
stripe, all on a white background.
Bruce Berry, 04 May 2009

The flag of the liberal the EZPZ New Generation Political Party is shown on their website.
Gary Selikow, 16 Dec 2003

The United Christian Democratic Party (UCDP) was formed by Lucas Mangope, the former President of the "homeland" of Bophuthatswana. Mangope was among the first homeland leaders to accept so-called independence for the seTswana-speaking people. The UCDP was the only party allowed to operate in the territories under his control.   According to its election manifesto, the vision of the UCDP is to be the leading party in uniting all South Africans, Christians and non-Christians alike, in a truly democratic, non-racial and non-sexist partnership inspired by the desire to work together in a diverse society in building a prosperous and free nation.
Bruce Berry, 29 June 2009

The flag of the Workers Party in South Africa can be found in the middle of their website.
When the emblem is used as a flag.  It is flown in the usual flag dimensions with the emblem in the middle, being the red star on the yellow diamond on a black background.
Gary Selikow, 16 Dec 2003