Here is the design of the flag for the proposed semi-autonomous area of Matabeleland in the southwestern part of  Zimbabwe. This region of the country is 181 000 km2 in area and has about 2 million inhabitants. It consists of three contemporary provinces, namely Matabeleland North, Matabeleland South and Bulawayo City.  The Matabele people (also called Ndebele or AmaNdebele) were originally part of the Zulu nation which seceded under Chief Shaka (in about 1830) and travelled northwards where they established a new homeland across Limpopo River in what is today Zimbabwe.  Descendants from the trek are also found in what used to be the KwaNdebele homeland, east of Pretoria.

After the independence of Zimbabwe, there were riots between Ndebele rebels and Zimbabwean army which killed many civilians between 1983 and 1987 called the Gukurahundi.   The Matabeleland Freedom Party (MFP) is part of the Mthwakazi movement, a coalition of mainly Ndebele who feel oppressed by Shona majority in Zimbabwe.  The MFP have designed flag of Matabeleland.  The flag is predominantly blue (although not a very popular colour in African flags but it is found in the flag of Bulawayo, capital of Matabeleland), with thin horizontal tricolor at the middle (similar tricolor has the flag of related Zulu people, but that one has colours of African National Congress, black, green and yellow): red is for blood, white is for peace, black is for strength. At the center of flag is brown shield with crossed spears (brown is for fertile soil) and a yellow saltire which symbolizes democracy (X for vote).
Jakub Grombíř, 08 Apr 2011

Actually, this is a design for a proposed flag of Matabeleland, rather than an actual flag of the area. Jakob refers to riots between the Ndebele and the Zimbabwe Army after independence. The AmaNdebele (or Matabele) people had voted more or less solidly against Mugabe's party in the independence election. In 1982 some demonstrations in Matabeleland gave Mugabe the excuse to employ the Zimbabwean Army "Five Brigade".  This was an élite, North Korean-trained force, distinct from the normal army.  They swept through the Matebeleland provinces and killed on the close order of 20,000 AmaNedebele between 1982 and 1984 (not 1987).  The term used for this operation is "Gukurahundi" (which is in the Shona language and translates as "winnowing the chaff").  Former Zimbabwe Vice President, the late Joshua Nkomo, was the leader of the Zimbabwe African People's Union (ZAPU), from which Mugabe's Zimbabwe African National Union (ZANU) split in the mid-1970s during the war against the Rhodesian regime.  After the Gukurahundi, Mugabe coerced  Nkomo into joining the government following the signing of the Unity Accord on 22 December 1987 and made him co-Vice President of Zimbabwe in 1990 - a position he held until his death on 01 July 1999.

The writer is correct in that blue is the colour of the flag of Bulawayo. This was adopted in colonial times and survived past independence in 1980.  The shield is like those on the flags of Kenya, Swaziland and on the former flag of Lesotho. In this case it is a traditional Zulu/Ndebele pattern, the AmaNdebele being a Zulu offshoot.  The "cross crosslet fitchée" is for the Christian missionaries of various denominations, who established missions in the area in the 1880s and 1890s. The three rock rabbits were an emblem of the AmaNdebele royal house of Khumalo. The elephant is for the last AmaNdebele king, Lobengula, whose name translates as "The Great Bull (elephant)". The motto is "Si Ye Pambili" (We shall go forward).

The "Mthwakazi" movement is a vague, loosely organised group of opponents of Zimbabwean President Mugabe and of Shona hegemony.  It has no effective platform and is known to have been infiltrated by Mugabe's supporters.  The Matabeleland Freedom Party exists almost entirely in the Zimbabwean diaspora. Admittedly, that includes some 25% of the country's population! It has a name, a flag and virtually nothing else. Alas, like the Shona and the other smaller tribes of Zimbabwe, the people of Matabeleland are more concerned with getting enough food to survive, rather than political flags or actions.
Michael Faul, 08 Apr 2011 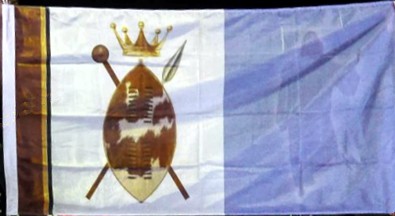 The Zimbabwean press (Newsday and The Standard)  have reported on the unveiling of a flag of the "new" Ndebele king in Matabeleland.

According to the articles, Stanley Raphael Tshuma has been making headlines claiming to be the new Ndebele King, Mzilikazi II.  On 08 July 2017 he declared his secessionist intentions by declaring a Mthwakazi state and unveiling its flag at a gathering held in Bulawayo’s Large City Hall.  He unveiled a flag which he says must be hoisted all over Mthwakazi after his inauguration on 12 September when he officially starts his reign.

The colours of the flag — brown, gold and black — are symbols of the natural resources, which the Mthwakazi nation is endowed with, while white symbolises peace, Tshuma said. The flag also has a sky blue stripes at the hoist with an imperceptile insert of a common white man — commonly referred to in the arts industry, as Christ. Other features of the flag include a golden royal crown and a traditional shield with a knobkerrie and a spear.   While the features and the colours of the flag remain open to semiotic
criticism, Mzilikazi II told the gathering he was convinced the flag was the right thing for the Mthwakazi nation. Tshuma, who also told the gathering that his real surname was Khumalo, also declared September 12, as his inauguration day. He stated that on the same day, the Mthwakazi flag will rise and the king’s interim council will be announced.
Olivier Touzeau, 13 Sept 2017