Toronto is the capital city of the province of Ontario and the largest city in Canada by population, with 2,731,571 residents in 2016. Also in 2016, the Toronto census metropolitan area (CMA), the majority of which is within the Greater Toronto Area (GTA), had a population of 5,928,040, making it Canada’s most populous CMA. Toronto is the anchor of an urban agglomeration, known as the Golden Horseshoe, in Southern Ontario on the northwestern shore of Lake Ontario. A global city, Toronto is a centre of business, finance, arts, and culture, and is recognized as one of the most multicultural and cosmopolitan cities in the world.

The flag of the City of Toronto has a medium blue field with a “T” shape in white. The trunk of the “T” is much wider than its crossbar, and is divided vertically by a blue bar which extends nearly to the base. The “T” is set toward the hoist, with the right edge of its trunk halfway to the fly. The crossbar curves upward slightly at both ends. A red Canadian maple leaf one-third the height of the flag is centred at the base of the “T”. The width of the trunk is one-fourth the flag’s length.
John M. Purcell, Canadian City Flags, Raven 18, 2011

The white band is supposed to resemble a T for the city's name, but also recalls the appearance of the City Hall building. The flag was adopted on the 140th anniversary of Toronto in 1974.
Mark Brader, 2 July 2016

The white object represents City Hall, one of the landmark buildings of the city, with its twin towers in silhouette forming a “T” on the flag for Toronto. The towers themselves curve toward the viewer at their outer sides, so the object on the flag creates a remarkably recognizable depiction of them. The maple leaf symbolizes the city council and recalls Toronto’s Canadian heritage.
John M. Purcell, Canadian City Flags, Raven 18, 2011

Flag of the former Metropolitan Toronto

A blue-green horizontal bicolor with a white six-looped design toward the hoist. 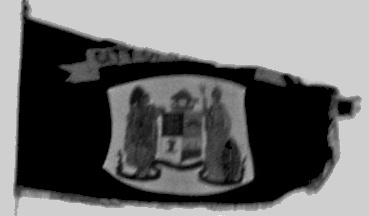 A dark blue(?) flag with the arms and a ribbon with the name above.

Badge of the service, on a blue field, with a red border:
http://www.mtppa.com/Images/Kandahar%20Airfield%202011.jpg
http://www.rcmp-grc.gc.ca/po-mp/images/afghan-commr.jpg
http://www.thestar.com/opinion/commentary/2014/12/13/why_is_john_tory_shilling_for_the_police_union_siddiqui.html

The blue appears to be #1397d9, based on an archived website. 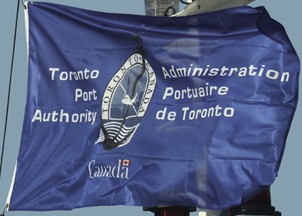 The pre-2015 flag was dark blue with the TPA badge in the centre, flanked by "Toronto Port Authority" in English and French, and the standard Canadian government logo at the bottom.

Green field, white Canadian pale, on the pale a green cabbage. More pictures are available on the internet, the apparent colour differences are not relevant I suppose. Once seen, never forgotten!
Jan Mertens, 18 August 2010

Two designs of the flag differing by the rendition of the cabbage can be seen on photos:
First design:
http://cabbagetownnews.blogspot.com/2009_02_01_archive.html
https://www.flickr.com/photos/suebie68/3389160230
http://www.houseoftheorangemonkey.co.uk/monkey/trips/trip55040805.htm
http://www.kikucorner.com/2014/09/24/cabbagetown-arts-and-crafts-neighbourhood-festival

Images of the flag of the village of Guildwood, Scarborough, Toronto, Ontario, Canada were obtained from https://pbs.twimg.com/media/DjOq8eeXgAARg6D.jpg and https://en.wikipedia.org/wiki/Guildwood#/media/File:GuildwoodVillageFlagToryAinslieMason.jpg.

Quartered, red, white, blue, with graphic images in each quarter.
Paul Bassinson, 12 May 2019

The following is from https://guildwood.on.ca/flag

The Story in the Flag
The Guildwood Village Flag has deep meaning. It tells the story about our neighbourhood using symbols of local features that resonate with residents. Together, the icons define what makes Guildwood Village so distinctive. Reading from left to right, top to bottom, the flag sends a clear and distinctive message: “Guild” “Wood” “Village” “on the Bluffs”.

Interpreting the Four Symbols
Top Left: The four columns represent the art, architecture and creativity associated with the Guild Park, site of historic Guild of All Arts. The image is a stylized version of the Bankers Bond columns, preserved and proudly displayed by the park entrance The colour red represents the energy, creativity and passion for which Guildwood Village is known. The red is also the same colour (Pantone 032) used in Canada’s national flag. This links our community to our country.

Top Right: The three trees represent our community’s wooded areas, green spaces and parks. The evergreen silhouettes refer to the tree that appears in the official crest of Guildwood Village. The colour green represents nature, renewal and growth. The green used (Pantone 348), is from the official colour palette of the Government of Canada.

Bottom Left: The bungalow represents the unique style of homes built throughout the village, known as “mid-century modern.” The icon is based on plans from one of Guildwood’s original model homes built along the village’s first residential streets, Avenue of Homes, (now called Toynbee Trail). The brown colour (Pantone 7603) is based on a colour used in the original Guildwood Village crest. This colour represents reliability, elegance, stability and home.

Bottom Right: The simplified bluffs and shoreline images are inspired by Scarborough’s official flag, designed by renowned artist, Doris McCarthy. The blue represents the sky and the lake, and is associated with freedom, imagination, expansiveness and inspiration. The blue colour (Pantone 287) is the same as in the City of Toronto’s flag, creating another link — between our community and our city.

Additional Points
The flag’s quadrant layout is a reminder that Guildwood Village evolved from the original 1957 development and expanded in sections. Another notable flag that uses four quadrants is the Royal Standard, the banner long used by Canada’s monarch, Queen Elizabeth II. The four quadrants and their colours also refer to the four seasons:
The red maple leaves of autumn;
the white winter snow around our homes;
the fresh green of spring’s renewal; and
the blue skies and open water of summer.
The Guildwood Village flag is designed so its length is twice its width. This size ratio of 2:1 is the same as the Canadian flag.

Two Toronto newspapers, "The National Post" and "The Torontoist", have jointly launched the Neighborhood Flags Contest "Flags for All":

Two flag proposals are shown on the websites of the organizing newspapers: The National Post and The Torontoist.
Ivan Sache, 4 October 2007

"The National Post", 1 November 2007, shows the six finalist flags, including two flags proposed by someone we all know here (am I right to see the influence of Piet Mondriaan in these two "block" flags?). There are comments by the two columnists who organized the contest beside each proposal, and these comments are particularly sounded.
http://communities.canada.com/nationalpost/blogs/toronto/archive/2007/11/01/flags-for-all-kensington-finalists.aspx
Ivan Sache, 11 November 2007


Having lots of experience with flags and flag design, I see some flaws in the choice for Kensington. The colours would be well chosen if they appear in darker tones; light green and light yellow however will fade in the first sunlight that hits them. The K device is also ill-chosen - first off all it is readable from only one side of the flag (all words and letters on flags have this problem!) Secondly what does an 'Olde English' style of font have to do with the market neighbourhood, apart from the name of a street 'Kensington' of English origin. Secondly this particular mixed font is highly suggestive of a Chinese-language character; this would mislead. I recall in the late 1940s, when we lived on Spadina, we didn't call it Kensington Market rather it was known as the Jewish market. Keep, but darken, the colours because they are representative of baked goods (gold or bright yellow) and vegetables (greens, fruit) major market staples over many years. Substitute a bagel for the letter K and you got it.
Kevin Harrington, 2 December 2007

Kevin Harrington's article "Seven Cities in Search of a Flag" was published in the Communications of the XI International Congress of Vexillology (Madrid, 1985). The City of Toronto is one of the seven administrative units making up Toronto. The others are Metropolitan Toronto (covering the whole of the city - the City of Toronto is only the city centre) and the boroughs of East York, Etobicoke, North York, Scarborough and York. All of them had flags.
Jan Oskar Engene, July 1996

Effective at the start of 1998, this federated structure was swept away by the provincial government and since then there has only been a single City of Toronto covering the whole area that used to be Metropolitan Toronto ("Metro").
Mark Brader, 2 July 2016