Gules, St. Fridolin marchant gardant argent, vested shoed and crined sable, nimbused or, carrying dexter a bourdon and sinister the Gospel all or.

On a red field, St. Fridolin walking towards the hoist and turning to face the viewer; his head and hands are white; hair, shoes and vestments are black; his halo (nimbus), staff and Bible are yellow or gold. In practice the image and stance of St. Fridolin has varied considerably. Sometimes he wears a hat; sometimes his Bible is red; sometimes his vestments are brown; sometimes he carries a pilgrim's bag; and from about 1437 to 1578 his plain pilgrim's staff was replaced by an abbot's or bishop's crozier. The modern, very stiff pose with sickly white face and hands was created by Ernst Keller and officially adopted in 1959.

Symbolism of the flag

St. Fridolin is the only saint to be depicted on a cantonal banner. He is said to have christianised the area.

History of the flag

There is some question whether St. Fridolin, who allegedly lived in the 6th century, ever existed. According to legend he was a Scottish or Irish missionary (under the direction of St. Columban -- not to be confused with Columba) who evangelised the German tribes with the blessing of the king of the Francs who had just converted to Christianity. He founded the monastery of Sackingen (umlaut on the a) on an island in the Rhine river, which ruled Glarus. Fridolin had evanglised Glarus after the founding of the monastery, and a Frankish count by the name of Urs bequeathed Glarus to the monastery in his last will. His brother Landolf contested the will, but Fridolin brought Urs back from the dead to prove his case. The great distance from Sackingen meant that Glarus enjoyed considerable independence, and by 1289 the town had its own seal. The seal showed a cleric kneeling and praying to the Virgin Mary. This might actually have been the prototype for St. Fridolin, whose first documented appearance on the Glarus flag is in 1388 (at the battle of Nafels). From about that time to 1792, the Glarus banner was always topped with a white Schwenkel. Real or fictitious, Fridolin remains the patron saint of Glarus. Glarus formally became a sovereign state in 1323 and joined the Swiss confederation in 1352.
T.F. Mills, 17 October 1997

The current symbols date from 1959. Until 1792, a white streamer adorned the banner.
Source: Angst (1992), "A Panoply of Colours: The Cantonal Banners of Switzerland and the Swiss National Flag"
Phil Nelson, 14 October 1998

Flaggen are vertically hoisted from a crossbar in the manner of gonfanon, in ratio of about 2:9, with a swallowtail that indents about 2 units. The chief, or hoist (square part) usually incorporates the design from the coat of arms – not from the flag. The fly part is always divided lengthwise, usually in a bicolour, triband or tricolour pattern (except Schwyz which is monocolour, and Glarus which has four stripes of unequal width). The colours chosen for the fly end are usually the main colours of the coat of arms, but the choice is not always straight forward.

Knatterfahnen are similar to Flaggen, but hoisted from the long side and have no swallow tail. They normally show the national, cantonal or communal flag in their chiefs. This postcard is circa 1910s and shows a flag of Glarus, Switzerland. I am not sure if there is a mistake on the postcard, or if it is historical.
Clayton Horner, 29 January 2014

At the beginning of the 20th century, flamed flags were still in use, with the white cross replaced by a baroque blazon in the centre of the flag. These decorative (but heraldically poor) flags had been used until WWII and then somewhat forgotten in preference of the current cantonal flags.
Pascal Gross, 30 June 2002 (see ch-war.html).

"At the beginning of the 20th century, flamed flags were still in use, with the white cross replaced by a baroque blazon in the centre of the flag. These decorative (but heraldically poor) flags had been used until WWII and then somewhat forgotten in preference of the current cantonal flags." (Pascal Gross, 30 June, 2002). The unidentified flag of Glarus canton, Switzerland, appears to be a flamed "war flag" version of the canton flag.
I have also located a currently marketed flamed version of the Glarus canton flag (#1). The flames on the UFE 14-13 postcard version are actually closer in configuration to the "modern war flags" shown on the FOTW page [where the above quote by Pascal Gross comes from], incorporating white flames into the design.
Nevertheless, it appears likely that the flag on the postcard is a rendition of the pre-WW2 Glarus canton war flag.
Russ Adams, 23 February 2014 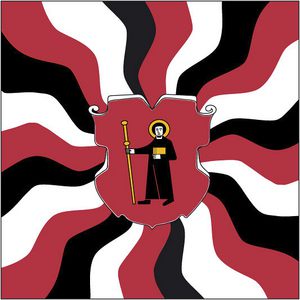 And here is another commercially available version (#2), this one incorporating white in the flame design.
Russ Adams, 24 February 2014