Academia Francia Belleza y Diseño Cauca, located in Popayan (Cauca Department) educates manicurists, podiatrists, hairdressers and make-up artists and designers.
The flag of the institute is horizontally divided white-green. A white triangle is placed along the hoist, limited on its left by a magenta border and charged with the institute's emblem.
The emblem of the institute was adopted by Agreement No. 1 of 15 March 2014, according to the norms established in the institute's Etiquette Guidebook and Corporative Visual Identity Guidebook. The shield is of "metallic texture". The gray bordure is inscribed with three words found in the Book of Proverbs, "CIENCIA SABIDURIA" (Science, Learning; left) and "CONOCIMIENTO" (Knowledge; right). The shield is vertically divided by wavy lines into three parts:
- the left part features on a magenta background a white pair of scissors representing the techniques and trends of decorative aesthetics:
- the right part features on a green background a hairdresser's comb, representing clearness and care in beauty;
- the central part features on a white background a composite element shaped like a woman's silhouette, made of the Eiffel Tower, representing the first logo of the institute and France ("Francia") superimposed with a woman wearing an elegant sombrero, clad in white and outlined in magenta, representing subtlety, elegance, glamour and beauty. Beneath the silhouette is an open book, superimposed with two hands supporting the woman-shaped silhouette, meaning that the institute is placed in God's hands.
The shield is surrounded by four scrolls attached to two staffs in the upper part, meaning command, safety and strength. In the lower part is a golden yellow plaque inscribed with "2005", the year of foundation of the institute as Institución Educativa para el Trabajo y el Desarrollo Humano. The two scrolls closer to the shield are green, while the two distant ones are magenta, inscribed with the institute's motto "ESFUERZATE Y SE VALIENTE" (Work and Be Valiant). The shield is surmounted by a white scroll inscribed with the institute's name in black capital letters.
Apple green, white and magenta are the corporate colours of the institute.
Green represents life, natural environment, growth, health, renovation, rest, fertility, resistance, freshness, elation, calm, balance, harmony, hope, youth, lightness, confidence, stability and economy.
White, as the colour of the Holy Ghost, represents purity, virginity, perfection and limpidity. Associated with light, kindness, innocence and freshness, it represents faith.
Magenta represents compassion, support, kindness, glamour, elegance, maturity, benignity, grace, sincerity, amiability, enthusiasm, understanding, abnegation and empowerment.
Source: http://academiafrancia.com/nosotros/simbolos-institucionales - Institute's website
Ivan Sache, 02 December 2014 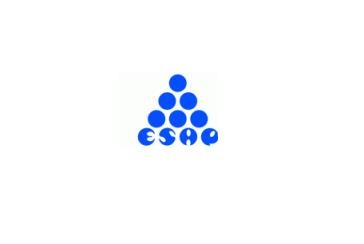 A while ago in May I spotted the ESAP flag shown on TV during the ceremonies for their 50th anniversary.
The ESAP (Escuela Superior de Administración Pública, Public Administration Superior School) was established by Law 19 of November 25, 1958 and traces its origins as a response to several missions to the country made earlier, but mainly during the regime of General Gustavo Rojas Pinilla (1953-1957), among them a commission from the French Government (n.d), The Kemmerer mission (led by prestigious Economist Edwin Walter Kemmerer which lasted several years and went to several countries, and visited Colombia in 1923 to help establish the Central Bank, today known as Banco de la República) the World Bank Mission in 1949 led by Professor Kerry, The Louchlin Currier mission (led by Canadian-born Economist, later U.S. naturalized citizen and then Colombian citizen after the U.S. denied to renew his passport Lauchlin Bernard Currie  between 1949 and 1953), and also private foundations such as the Ford and Kellogg Foundations), in which some of their recommendations were to modernize the Colombian State Organization.
The ESAP is a Public University under the DAFP and helps in administrative tasks to educate people who are to work in the civil service.
It currently operates several branches around to cover the whole country as follows:
- Antioquia – Chocó (located in Medellín)
- Atlántico, Magdalena, Cesar and Guajira (located in Barranquilla)
- Bolívar, Sucre, Córdoba and San Andrés Islas. (located in Cartagena)
- Boyacá and Casanare (located in Tunja)
- Caldas (located in Manizales)
- Cauca (located in Popayán)
- Cundinamarca (located in Fusagasuga)
- Huila and Caquetá (located in Neiva)
- Meta, Guaviare, Guainia, Vaupés, Vichada, Amazonas (located in Villavicencio)
- Nariño, Putumayo (located in Pasto)
- Norte de Santander – Arauca (located in Cucuta)
- Risaralda – Quindío (located in Dosquebradas)
- Santander (located in Bucaramanga)
- Tolima (located in Ibagué)
- Valle (located in Cali
The flag is the ESAP logo on a white background.
Sources: ESAP official website, Spanish wikipedia.
E.R., 16 June 2009

Institución Educativa Adolfo Hoyos Ocampo is located in Manizales (Caldas Department). The institute is named for Father Adolfo Hoyos Ocampo (1882-1970), considered as a benefactor of Manizales. President of the Society for Public Improvement, the priest pushed the building of the roads to Chinchiná and Termales, of the Nubia airport, of the Palace of Fine Arts, of the Caldas cement factory, of the Faculty of Medicine of the Caldas University and of the Faculty of Engineering of the National University.

The flag of the institute is vertically divided blue-white-blue with the institute's emblem in the middle. Blue is a symbol of the depth of ideas and of the Blessed Virgin, a model of virtues and values. White is a symbol of transparency, peace, tolerance, and purity.
http://caho.edu.co/wordpress/?page_id=35 - Institute's website

The emblem of the institute is inscribed in a blue equilateral triangle, a symbol of stability and strength. It features the three pillars of the institute on a golden background, a symbol of wealth, an open book as an example of study and knowledge, from which emerges, as a consequence, a dove with spread wings, an invitation to personal and community peace; all over, the sacred illumination of the Holy Trinity.
http://caho.edu.co/wordpress/?page_id=34 - Institute's website
Ivan Sache, 22 July 2014

The flag of Colegio Adoratrices is green with the school's emblem.
Green is a symbol of mystic, inner life and all principles required to increase creative and sensible skills. Green synthesizes the force of intelligence.

The emblem is composed of a shield placed on a green background and surrounded by a ring inscribed with the school's name and location.
The upper part of the shield is shining like the sun and inscribed with "Charitas" (Charity). Beneath it, the writing "Alabado sea el Santísimo Sacramento" (Glory to the Blessed Sacrament), highlighting the monstrance featured in the center and Eucharistic adoration.
The monstrance is surrounded left by a branch of red roses, symbolizing love, and right by a lily, symbolizing purity and beauty. The two plants are tied by a Marian monogram.

The flag of the institute is divided white-wine red by a thin green stripe running from the lower hoist to the upper fly. White is a symbol of beauty, honour and transparency. Wine red is a symbol of human touch, affectivity and cordiality. Green is a symbol of hope.
http://www.colaeropuerto.edu.co/simbolos.html - Institute's website
Ivan Sache, 9 July 2014