Imbabura is a province in north Ecuador in Sierra Region. The capital is Ibarra.
Željko Heimer, 15 July 1996

According to a photo at <fici.nativeweb.org>, the flag (or the ceremonial flag?) includes the Coat of Arms. In the photo the flag doesn't looks like 1:2.
Dov Gutterman, 4 June 2001

The official website of the province does not seem to say anything on the symbols. There is an image of the flag on Wikipedia, "based in the original design", representing the flag with 523 x 231 px and the triangle much bigger than on the image above.
Ivan Sache, 13 October 2008

The symbols of Imbabura province are prescribed in a Decree issued on 22
August 1957.

Article 1.
The official emblems of Imbabura province shall be a flag composed of three stripes, from top to bottom, red, white and green, with a blue triangle whose vertex matches the center of the white stripe; a coat of arms, synthesis of the province's spirit and greatness, composed of a shield whose golden border represents nobleness that surrounds it; at the top of the shield is the Imbabura sky charged with four stars representing the four cantons composing the province in perennial confraternity; the sky is superimposed with Mount Imbabura, whose shape represents the elevation of thought in which the inhabitants search for inspiration; at the mountain's foot is a lake reproducing those embellishing the Imbabura landscape; beneath the lake is a white field charged with a cornucopia pouring crop products proper to the province; on the dexter and sinister flanks are shown a branch of laurel and a branch of olive, symbolizing Imbabura's triumph and peace; the two branches are tied by a blue scroll representing the union of triumph and peace enjoyed by the province all along its history; the shield is crowned by a sun, meaning the creating principle of the inhabitants; all over is a scroll inscribed "Provincia de Imbabura 1824".

As stated above, the flag is sometimes used with the coat of arms.

This is a previously reported wrong flag.
Jaume Ollé, before 1998 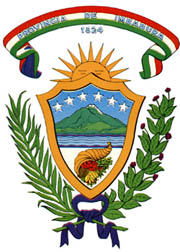