FIFA, together with three United Nations agencies, will run a range of campaigns during the FIFA World Cup Qatar 2022 to send messages promoting health, unity and non-discrimination to the billions of worldwide viewers across multiple channels. These campaigns have taken into account feedback received from our member associations who, like FIFA, are committed to using the power of football to effect positive change around the world. Each round of matches will be associated with its own dedicated campaign designed to maximise reach and impact. These will be run together with FIFA’s partner agencies from the United Nations, including the United Nations Educational, Scientific and Cultural Organization (UNESCO), the World Food Programme (WFP) and the World Health Organization (WHO). Messaging opportunities will be provided to the participating teams via the team captains’ armbands during matches, with supporting content being displayed on LED screens around the pitch, on giant screens and on flags in the stadiums, together with additional amplification on FIFA’s digital platforms and through media, stakeholders, and other public activities.
Esteban Rivera, 20 November 2022

For the 2022 World Cup in Qatar, the highlighted campaigns are as follows:
Esteban Rivera, 20 November 2022 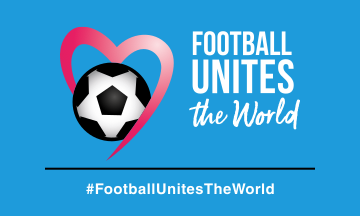 The flag is a blue horizontal background featuring a dark purple ribbon in the shape of a heart and inside, a football based on the Adidas Telstar design, which is based on the Telstar satellite, featuring a Truncated icosahedron pattern with a 32-panel black-and-white ball based on the work of Danish amateur goalkeeper Eigil Nielsen used first at the 1970 FIFA World Cup and then used for the 1972 and 1976 UEFA European Championships as well. Below the campaign's name is the FIFA title card in black letters and white background (resembling a miniature version of the current flag) and the vertical (upside down) ™ symbol. The first flag was displayed during the inaugural match of Qatar vs. Ecuador during the 2022 FIFA World Cup Sunday, November 20 at Al Bayt Stadium in Doha.
Esteban Rivera, 20 November 2022

Initially set to be unveiled for the second Group Stage of the current FIFA World Cup today during the Netherlands vs. Ecuador match the "Save the Planet" flag was spotted. The flag is green with the logo up top with the associated hashtag at the bottom.
Esteban Rivera, 25 November 2022

Today during the Wales vs. England match at the FIFA World Cup 2022 the "Protect Children" flag was spotted, as part of the current FIFA Social Campaign.
Esteban Rivera, 29 November 2022