Croatian Bank for Reconstruction and Development

The Croatian Bank for Reconstruction and Development (website) was established by law in 1992 as the Croatian Credit Bank for Reconstruction (Hrvatska kreditna banka za obnovu) and took its new name in 1995; it is fully owned of the state, aiming at helping with the reconstruction of the war-destroyed regions and at developing economy, especially in the underdeveloped regions.
The flag of HBOR is white with a gray pentagram field containing the initials of the bank and a red square rotated 45 degrees, and, in the base, the full name of the bank.

HEP (website) is the state-owned company running the power plants and power supply systems. In the early 1990s the company ran a contest for a new logo, which was won by a young female student in architecture with a rather well-designed graphical identity including not only the logo but a also a flag that is not just a logo on on a white field.
The logo of the company consists of a square divided by a symbolic white thunderbolt into red and blue parts. The flag is made of this logo within a white border, but with the blue part enlarged so that it fills out the rest of the flag. In the blue part in the lower fly is the company "cypher", the italic letters "HEP" outlined in white.
The flag is, as a rule, hoisted on the power plants and on the company administrative buildings that exist probably in each County capital, at least. I have seen the flag in Zagreb, Opatija, Korenica, Gospić, Varaždin and over several power plants.

HŽ (website) is the national railways company. It adopted a new symbol in the early 1990s, made of a circle with the company initials vaguely reminding railway tracks.
The company flag seems to be white with the blue symbol, but flags with other color combinations might also be seen, occasionally. A few years ago I noticed in the company newsletter and website the announcement of a competition for new symbols. However, now quite some time has passed on and no change has been made, so probably the competition did not yield anything of interest.

HV (website) is the state company in charge of water management in general sense, including management of drinking water, water usage management, control, survey and information on water conditions, maintainance and regulation of watercourses, ice and flood control, protection of water resources etc.
The company flag is a vertical white flag, in proportions 3:2, with the company logo in the middle covering the entire flag's width and with the company name in the base. The logo conists of ten irregular wavy bars, top five green and bottom five blue.
The flag is hoisted in front of the company headquarters in Zagreb, and, probably, also in other places around the country.

FINA (website) is the main company in the financial mediation, owned by the state dealing with the public finances. It has been established in 2002 by the reform of the state-owned Institute for Payment Transactions (Zavod za platni promet, ZAP), and of the older Social Accounting Service (Služba društvenog knjigovodstva, SDK). In the Socialist period, SDK enjoyed the exclusive right in the former state to perform payment transactions within the country. In 1993 it was transformed into ZAP and gradually the state removed the monopoly in the transactions. FINA has over 180 offices in all towns around the country.
Recently, a flag appeared over some of the FINA offices in Zagreb. To the best of my knowledge, this is the first time that this agency uses a flag. The flag is very dark blue (it looks almost black, but I doubt that it was the color of choice) with the logo of the agency set along the very bottom of the flag. The flag is apparently printed, so that the reverse includes the logo along the oposite edge rotated 180 degrees. When the lighting is proper, that is, almost whenever there is enough light to see colours, the logo from the back side is visible through semitransparent sheet. It may have been intentional, or not.
The logo consists of the writing "Fina" using a sans-seriffed font, with 9 rectangles ot the left of letter "F", each gradually being thinner than the previous. 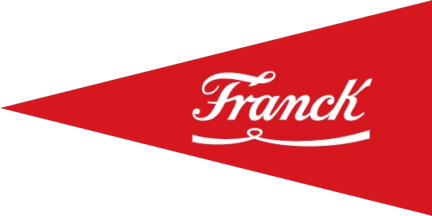 Franck is a coffee, tea and snacks company from Zagreb. Founded in 1892 as a part of the German multinational company Heinrich Franck Söhne, the company was nationalized after the Second World War After and privzatized in 1992. The company kept its basic name all along its existence.
The flag of Franck (photo) is white with the company's emblem on top. A triangular, red version of the flag is used as drone pennant (photos, photos).

JANAF (website) maintains the main Croatian oil pipeline starting at refineries in Rijeka region at the coast running towards east all over the country, dividing into two branches in the middle, around Sisak, one heading further east towards Serbia and the other going north east towards Hungary and further on trough Slovakia, Belarus, Ukraine, ending in Samara in Russia after 3,200 km.
The company flag is white with the company logo in the upper part and five horizontal stripes fimbriated white in the base, the topmost dark blue and the remaining light blue. The flag is hoisted at the company headquarters in Zagreb, but, probably, also on the installations along the pipeline.

Končar is a joint stock company with 17 subsidiaries and 1 associate company.
History of Končar started in 1921 when Elektra was founded. The same year the company was acquired by Siemens and operated unter that name until the end of the Second World War. From 1946 to 1990 the company operated unter the name "Rade Končar" and since January 1st 1991 it has been organized as a joint stock company opertating under the the name Končar - Elektoindustrija.
Rade Končar (1911-1942) was secretary of the Communist Party of Croatia and organizer of partisan detachments in Croatia. He was posthumously named the first People's hero of Yugoslavia and was revered as a war hero.

The flag of Končar Group (photo) is blue with the group's name in white.

Kraš is a food company from Zagreb, specializing in confectionery products. Kraš wass founded in 1911 as Union and merged in 1950 with Bizjak and other smaller manufaturers, taking the name "Josip Kraš". In 1992, with privatization, the company was renamed simply as Kraš.
Josip Kraš (1900-1941) was a Communist, union activist and partisan. Posthumously he was awarded with the title of People's Hero.

The flag of Kraš, used either horizontally (photo) or vertically (photo, photo), is white with the company's logo, which dates back to the 1960s.

INA (website) is the Croatian national petroleum company, once monopolistic and still mainly state-owned; a large part of it was bought lately by the Hungarian national oil company MOL. INA is an economic giant with business in a variety of areas more or less connected with oil. It also include a numbe of daughter companies, some of which have flags of their own. Usually such companies fly their own flag together with the flag of INA and, not unfrequently, with the flag of the "mining industry", green over black with golden miner's hammers, sometimes also with a derrick overall). INA also owns a number of petrol stations all around the country and some in the neighboring countries from former Yugoslavia. While these have previously often used the company flag as presented here, today most of them use vertical knatterfahnen of various merchant campaigns, often quite colorful. The company flag is thus relatively less frequently seen, at the various company headquarters, as a rule.

CROSCO (website) is a daughter company of INA. The company does oil drilling and similar research and oil exploitation around the world.
The flag is red with the company logo in the middle, a yellow oval with the company name and a circular emblem in red-white-blue. The flag is hoisted at the company headquarters in Zagreb and, probably, on their oil rigs, too. In Zagreb the flag is hoisted together with two other flags - the mother company flag INA in the middle and at the viewer's left the flag of the "mining industry".

Podravka is food company based in Koprivnica. Founded in 1934 by brothers Marijan and Matija Wolf, the company was nationalized In 1947 and received its current name. Podravka literaly means "Woman from Podravina", Podravina meaning "river Drava area".
The flag of Podravka (video, photos) is red with the company's logo in the bottom.

ARZ is the privately owned concessionaire of the highway connecting the main Croatian port of Rijeka and the capital, Zagreb. This is probably the most frequented highway, since it partially also covers the main country's road towards south (Zadar, Split, Dubrovnik...).
The flag of ARZ is yellow, vertically hoisted with the company logo in the middle and its name printed in black, beneath. The logo consists of stylized highway roads with a tunnel and a turnpike in green and blue lined white; there is indeed a large number of tunnels on that road. The flag is, as a rule, hoisted on all tollbooths along the highway, often quite nicely standing out from the green scenery through which the road is passing by.