The Caprivi African National Union (CANU) of the Free State of the Caprivi Strip/Itenge has a sample of their flag on their web siteite.
Edgar Melvin, 07 Apr 2003

There's an image of the flag at this webpage.

In today's paper was a story about a declaration of war by some Caprivi Liberation Army to the Namibian government. They declare that they want an independent Caprivi, but, giving the history of the area, this might be closely connected with the conflict in Angola, as they seem to be friends with UNITA in neighbouring Angola. Obvious question: what flag would they choose, given the several different ones used in Caprivi in the past?
Jorge Candeias, 5 Aug 1999

There is a new party, the Congress of Democrats (COD). Its flag has a blue field. There are two white lines that form a cross divided in four equals parts with a big yellow five pointed star in the center fimbriated in white. The fimbriation joins with the two lines (same width). The flag is printed in colorful leaflets of the party. They have T-shirts with the flag too, and in the central office of the party in Windhoek, their flag is flying from a pole painted with blue and yellow stripes; on another higher pole the national flag is flying.
Santiago Tazón, 25 Oct 1999

The flag of the Democratic Turnahalle Alliance (DTA) is equal diagonal stripes of blue over red, charged in the centre with a white roundel bearing a hand couped at the wrist, giving the "Victory" sign, in blue outline, above the letters D.T.A. in red. This was the flag in use at the time of the 1989 elections.

Previously the DTA used a flag which was vertically divided in the centre, with light blue at the hoist and white in the fly. There were eleven gold stars forming a circle, one for each of the ethnic groups in the territory.
Bruce Berry, 20 Feb 1998

Turnhalle (literally : Gymnastics Hall in German) is the name of the sports house in Windhoek where the constitutional conference about Namibia was held in September 1975. The Hall was built in 1913 by the Germans. At the conference there were 134 delegates from 11 organizations present:

The President of the National Party, A.H. Du Plessis and the president of the Constitutional Committee Dirk Mudge quarreled and Mr. Mudge created a new party called the Republican Party. The Democratic Alliance of Turnhalle was created on 05 November 1977 and in the elections of 04 December 1978 took 41 seats.  Mudge took charge of the provisional government on 14 December 1980, but this was not recognized by the United Nations and it was dissolved in January 1983.
Around 1977 the DTA adopted a flag vertical light blue and white with eleven golden stars in circle in the centre. The 11 stars are for the 11 delegations in the Constitutional conference, but the DTA in 1977 comprised a total of 13 parties or groups.
Jaume Ollé, 02 Sept 1998

The official web-site of party of the DTA of Namibia (founded in 1989 as the Democratic Turnhalle Alliance) shows the flag of the party.  This is four equal diagonal stripes of white, blue, red and white.  In the centre is a white disc on which is the logo of the party - an outline in blue of a hand showing "V' for victory with the acronym of the party in red below as shown above. 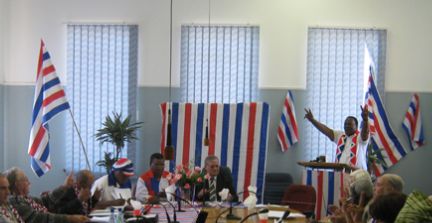 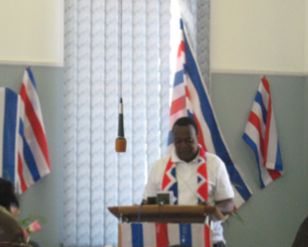 The website also has a gallery showing party supporters dressed in robes of red, white and blue and flags with 7 and 11 red, white, blue horizontal stripes.
Mikhail Revnivtsev, 03 March 2010

The image above which is said to represent the party flag, is actually just one version of the party logo, used in combination with other graphics, as a blue-red diagonal "ribbon" charged with the roundel and superimposed over the other charges. The stand-alone logo, as shown on the party website is a rounded rectangle, divided diagonally blue above red, charged with a black outline of the victory sign on a white disc. The logo may also have the victory sign in blue above red initials DTA and the corners are not necessarily rounded. As shown in the photo gallery on the party website it clearly looks flag-like, but no use of it as a real flag is recorded so far.

As can be seen from the photo gallery, another flag of DTA is a blue-white-red horizontal tricolor. The ratio may be about 2:3 but may also be more oblong,  as seen in some of the other images.  Clearly, the ratio is either not prescribed or not strictly enforced.  As the above examples reveal, the shade of red is the same or very similar to that of the Namibian national flag, and blue may also be the same, but is often visibly darker, and very rarely, may be lighter.

A strikingly different ratio is 3:1, shown in its election manifesto launch, as shown here, differs enough to be considered a distinctive variant. The parallel existence of such "horizontal" and "vertical" variants resembles such use in India - for example, by the Marumalarchi Dravida Munnetra Kazhagam or Puthiya Tamilagam - but currently it seems impossible to prove either the existence or the lack of any influence from India on the flag of DTA.

images by Tomislav Todorović, 13 Aug 2016 (based on those found here by Mark Sensen)

The photos shown above sent by Mikhail Revnivtsev seem to originate from the old website of DTA, which was shut down some time after this contribution was sent to FOTW-ml and all of its content was lost. This is evident from the fact that only these two photos can now be found at the party website dealing with its history.  It is obvious that both the 7-striped and and 11-striped flags could be used either with red or with blue stripe at the top. When red is at the top, 7-striped and 11-striped flags look exactly like the "double Prince flag" or "triple Prince flag" from the Netherlands.  It may be difficult to prove the existence of such influence, but it should not be excluded, since it may have come via South Africa, which had governed Namibia at the time DTA was founded and whose flags at the said time were derived from the Prince flag.

images by Tomislav Todorović, 13 Aug 2016 (based on those found here by Mark Sensen)

The photos from gallery also reveal that blue-white-red colour scheme-stripes, but other patterns as well - is still much used for party supporters' clothing. An interesting feature are the shawls in party colours, which also used by the other political parties in Namibia, but curiously, widely used in India as well - again, the influence or lack thereof cannot currently be proved.
Tomislav Todorović, 13 Aug 2016

At an extraordinary congress of the party, the DTA was renamed the Popular Democratic Movement (PDM) on 04 November 2017.  The party logo was modified so as to include the new name abbreviation, but the blue-white-red tricolor remains in use, as confirmed here in December 2018.
Tomislav Todorović, 01 Oct 2019

The red flag is the flag of the Labour Front (represents merged people).
Jaume Ollé, 14 June 2004

At an extraordinary congress of the party, the DTA was renamed the Popular Democratic Movement (PDM) on 04 November 2017.  The party logo was modified so as to include the new name abbreviation, but the blue-white-red tricolor remains in use, as confirmed here in December 2018.
Tomislav Todorović, 01 Oct 2019

From the collection of maps on flags provided by Mason Kaye, we have a blue map of Namibia on a white background.
Rob Raeside, 14 June 2004

The blue flag (blue as in image, not black as in description) is the flag of Baster Party (Rehoboth Liberated Democratic Party).
Jaume Ollé, 14 June 2004

This is quite different from the traditional Rehoboth flags previously referred to as being:
" In 1872 a national flag of German influence was adopted: it was black over white over red. Another, more distinctive variant comprised concentric squares of, from the inside, white, red, black".

There was another liberation movement called SWANU, with a similar flag. Does anyone know about this flag?
Mark Sensen, 10 Aug 1999

The flag of SWANU (South West Africa National Union) was very similar to that of SWAPO (South West Africa People's Organisation) in that it also comprised the three horizontal stripes of blue, red and green.  In the case of SWANU, two narrow gold stripes separated the blue, red and green from one another. The SWANU flag was thus blue, gold, red, gold and green  stripes in the same construction format as the current flag of Gambia.
Bruce Berry, 18 Aug 1999

SWANU (South West African National Union) at first joined hands with SWAPO. Later this Hereo-supported group joined with the Damara Council and other smaller groups to form a multiracial coalition (Source: Political Handbook of the World, 1997).   SWAPO in Namibia represents the major Ovambo group (47% of the Namibian population), while SWANU (is that now Congress of Democrats?) represents the Herero (7%) and Damara (7%).
Jarig Bakker, 02 Apr 2001

In Dorling Kindersley's 'Flags of the World', it says that the Namibian flag combines the colours of the SWAPO flag with that of the second largest party, the DTA.  I know that SWAPO used a blue-red-green horizontal tricolour during the independence struggle.
Vincent Morley, 19 Feb 1998

The flag with blue red green horizontal stripes on the Namibia page is the flag of SWAPO as illustrated on p. 20 of the book "Collins Eyewitness Guides FLAG" written by William Crampton published 1989 and in 1990 by Dorling Kindersley in the UK [cra90n] and also by Collins in Australia where I live.
Gilbert Read, 02 Sept 2005

The United Democratic Party is political party from Namibia, whose programme is for the independence of the Caprivi Strip (also called Itenge). It has a flag consisting from four stripes of blue, white, red and green symbolizing the four rivers of this region.  A black triangle at the hoist symbolises Africa.  In the fly is a white oval containing a grey elephant.  More information can be found at party website.
Jakub Grombir, 23 Dec 2010