In 1889 the Italians colonised the south of the territory which is now part of Somalia.  This area became known as Italian Somaliland.

Italy, under Mussolini, invaded Abyssinia (now Ethiopia) in 1935, in an attempt to colonise it.  This action was condemned by the League of Nations, but little was done to prevent it or to liberate Italian occupied Ethiopia.

After the cessation of hostilities at the end of World War II, the newly formed United Nations made the former Italian Somaliland a protectorate of Italy in 1949.  The Ogaden province was given to the re-established government of Ethiopia by the British, which also maintained its control over British Somaliland until independence in 1960.

Italian East Africa (or Africa Orientale Italiana in Italian) (AOI) was a short-lived Italian colony in the Horn of Africa between 1936 and 1941.  The AOI consisted of Ethiopia (occupied after the Second Italo-Abyssinian War) and the colonies of Italian Somaliland and Eritrea and was held in the name of Victor Emmanuel III of the Kingdom of Italy.  In August 1940 neighbouring British Somaliland
was invaded by Italy and annexed to the AOI. 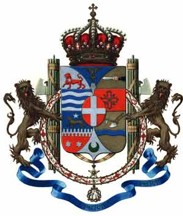 The AOI also had a distinctive coat of arms which are illustrated above.

Italian Somalia was a colony under Italian control from the late 1880s until 1942 in the north-east of what is today the nation of Somalia. Italian settlement in the colony was encouraged and it was from its territories in Eritrea and Somalia that Italy launched the First Italo-Abyssinian War against Ethiopia in 1895.  In 1936, after the Second Italo-Abyssian War, Italian Somalia became part of Italian East Africa, which also included Ethiopia and Eritrea. Later, in 1940, Italy successfully conquered British Somaliland and annexed it to Italian Somalia.  An Allied counter-offensive saw Italy loose all its East African colonies in 1942.  Italian Somalia was under British administration until 1949 when it became a United Nations Trust Territory under Italian administration until it received independence in 1960.

Although there was a colonial coat of arms, there was no distinctive flag for the colony and the flag of the Kingdom of Italy was used.  Flags used by the Colonial Governors are illustrated and described here.
Bruce Berry, 27 June 2008