Description and use of the flag

The military flag of El Salvador is pure blue over white over blue flag with the state's coat of arms, ratio 189:335. The military flag is used by the government on land and the military forces on land and sea.
The coat of arms itself is similar to Nicaraguan, but more complicated, with five flags around the triangle and green branches. Text around it sais: REPUBLICA DE EL SALVADOR EN LA AMERICA CENTRAL. In the middle of the triangle above the cap is the date 15 DE SET DE 1821 (15th of September, 1821), the independence day.
Željko Heimer, 29 February 1996

At "Nouveau Petit Larousse Illustre" (1926) - El Salvador has a version of the emblem with four flags but without any text around it. The triangle looks like a red sea in front of blue mountains, with a liberty cap above them, but it may have been hard to put all the exact details in a 3mm high triangle.
Peter Hans van den Muijzenberg, 29 October 2000

According to Album 2000 [pay00]:
- National Flag and Naval Ensign (-SW/--W 189:335) - Blue-white-blue triband with the national coat of arms in the middle of the white stripe. The coat of arms I used is by Graham Bartram (see: National Flag and Naval Ensign) though at this size it is probably not that important. I noted that the modern representation (both Graham and Armand) do not include the five-pointed star at the base of the circular inscription, that is found in older images, like Flaggenbuch and National Geographic 1917.
Željko Heimer, 7 January 2003

Details of The Flag and the Coat of Arms

El Salvador's state flag shows a central triangle featuring the sun behind a pole with a Phrygian cap on it.
Graham Bartram, 10 July 1997

In the rays of the sun there is a date - 15 DE SEPTIEMBRE DE 1821 (the date of liberation from Spanish rule)
Source: Concise Encyclopaedia of Flags & Coats of Arms, 1985. There it is stated too: 'The most recent law regulating the coat of arms was issued in 1972.

I searched the web for El Salvador's flag and there seems to be a lot of agreement on one thing: they're all different regarding the Coat of Arms, there was even one colored on black (ministry of the Interior).
There is a long explanation of the flag (including biographies of poets who wrote poems on the flag) at: <www.asamblea.gob.sv/bandera.htm> and a long explanation of the Coat of Arms at: <www.asamblea.gob.sv/escudo.htm>.
Jarig Bakker, 11 September 1999

It certainly is the Official Website of the Legislative Assembly (Congress). it says:
COAT-OF-ARMS - As for the Coat of Arms webpage, it starts describing the Coat of Arms which is quite similar but not identical to that of Honduras which I just sent: An equilateral triangle. On its base five volcanoes bathed by two seas, on its top a rainbow and below it a red Phrygian cap spreading light. Superimposed on this light a semicircular motto "15 DE SEPTIEMBRE DE 1821". Around the triangle the gold lettering: "REPUBLICA DE EL SALVADOR EN LA AMÉRICA CENTRAL" [Republic of El Salvador in Central America]. Below the triangle the motto "DIOS UNIÓN LIBERTAD" and on each side of the triangle two flags with stripes blue-white-blue, and one more on top of the triangle, all of them with a lance-topped finial. Two encircling laurel branches, each with seven bunches of leaves.
The original design of this version of the coat of arms was made by Rafael Barraza Rodríguez who won a 1912 contest by the War and Nay Ministry which had 30 entries. Initially it did not have the five flags nor the laurel branches. It was approved by Decree of the National Assembly on March 20th 1916.
Santiago Dotor, 15 September 1999

We can easily disqualify Flaggenbuch as outdated. The inscription seems consensual, but not its colour! Gold letters encircled by golden sunrays are really difficult to read, and might have been 'highlighted' in red or black for the sake of clarity (as it is sometimes done with ancient stone-carvings.)

It is a very complex arms: an emblem including a date, upon a scroll including the national motto, the whole surrounded by the extended name of the country.
Ivan Sache, 11 September 1999

From El Salvador Embassy in USA site:
"THE NATIONAL COAT OF ARMS CONSISTS OF THE FOLLOWING:
FIVE FLAGS - Five fraternal Central American countries (El Salvador, Guatemala, Honduras, Nicaragua and Costa Rica).
BLUE STRIPE ON THE FLAGS - The sea and the sky
WHITE STRIP ON THE FLAGS - Peace
FOURTEEN LAUREL LEAVES - Fourteen Departments (or States) of the Republic of El Salvador
PHRYGIAN CAP - The cap of liberty
FIVE VOLCANOS - Represent the Central American Isthmus which represent the five nations in the isthmus, washed by the two oceans
OCEANS - Pacific and Atlantic oceans
EQUILATERAL TRIANGLE - Equality of individuals. The three Branches of the Republic (Executive, Legislative and Judicial)
RAINBOW - Hope
GOD, UNION AND LIBERTY - The Republic of El Salvador is based on this principle
BOW (KNOT) - Unity
SEPTEMBER 15, 1821 - Day of Independence of the Republic of El Salvador"
Dov Gutterman, 21 January 2002

In the center of El Salvador coat of arms I see there several rays but as an "aureola" of the Phrygian cap, not a sun. In the Spanish text they say: "Bajo el arco iris, el gorro frigio de color encarnado, esparciendo luces...", which means that it is not the sun but the Phrygian cup who "brights". I agree that they seams like the rays of a sun but I think that they are not.  It seems that this Phrygian cap is traced by the old engravers who designed that "brightness" as rays of a sun, the same rays that we can "see" when we see directly to the sun or a turn on lamp...
Luis Havas, 16 and 19 November 2004

Naval Ensign and Flag of Diplomatic Missions Abroad in Flaggenbuch 1939

Looking in Flaggenbuch 1939 [neu92] it seems that Salvadorian flag has not changed much since. Naval Ensign and Flag of Diplomatic Missions Abroad (2:3~) - As today, but including a five-pointed star in the base. In the National Geograpic Magazine 1917 Flag Number there are is No. 506.- Salvador Ensign (4:7~) - With coat of arms (also with the star in base as in Flaggenbuch).
Željko Heimer, 7 January 2003 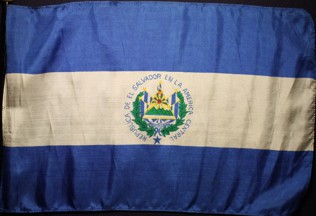 This variant of the El Salvador flag has been on my mind for a while and I bought a lot that has this variant: (https://i.ebayimg.com/images/g/hzsAAOSw-Wxhguxh/s-l1600.jpg) and it contains blue context and a small tiny star under the emblem.
BlinxCat, 26 November 2021