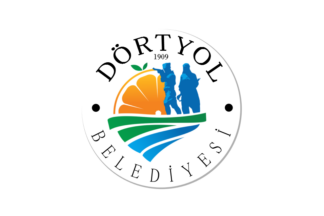 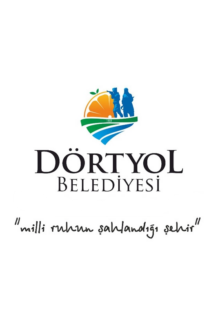 The municipality of Dörtyol (151,837 inhabitants in 2012, 75,110 in the town proper; 59,997 ha) is located 30 km north of Iskenderun. The town is mostly known today for its port and oil terminal, connected by pipelines to Kirkuk (Iraq) and Batman (Turkey) oil fields.
Dörtyol, then known known as Chorkmarzban, was once mostly inhabited by Armenians. The Armenian community resisted massacres in 1895, 1909, and 1919-1921.

The flag of Dörtyol, used horizontally (photo), or vertically (photo), is white with the municipality's emblem.

The emblem of the municipality features an orange, recalling that Dörtyol is Turkey's Orange County. A cultivar of sweet orange is named for the town.
Orange production was initiated in 1860 when Kyuchyuk-Sarkisian brought back orange seedlings from Jaffa when he made a pilgrimage to Jerusalem and established an orange orchard. A few decades later, the town was totally surrounded with orange orchards. Originally sold on local markets (Adana, Marash and Aleppo), the Dörtyol oranges were soon exported to European markets, representing 70% of the income of the area. Greek-orthodox merchants from İzmir established the Yepremian factory.
The luxuriant orange trees would often grow to heights of 18-20 meters. The harvest would usually begin in September when the oranges had fully ripened. Some 180 million oranges were harvested per year. Merchants sold one thousand oranges at a price of one Ottoman gold piece.
[Dörtyol - Trades, by Vera Sahakyan] 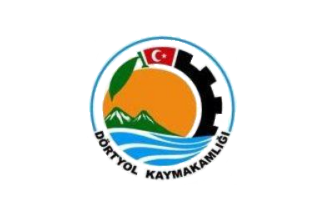 Flag of the Dörtyol district government - Image by Tomislav Šipek, 25 May 2015

Dörtyol Chamber of Commerce and Industry

Flag of the Dörtyol Chamber of Commerce and Industry - Image by Ivan Sache, 1 August 2019

The flag of the Dörtyol Chamber of Commerce and Industry (photo, photo) is white with the organization's emblem.