The flag of Sivas, used horizontally, is red (photo) or white (photo) with the municipality's emblem. The flag used vertically (photo). has a purple background. "Belediyesi" means "Municipality". 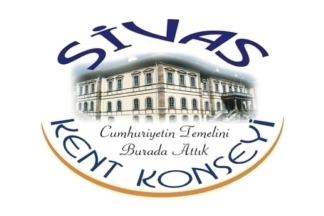 The flag of the Sivas City Council (photo) is white with the council's emblem. "Kent Konseyi" means "City Council".
The emblem features the building where the Sivas Congress was held from 2 September to 18 December 1919. The writing, "Cumhuriyetin Temelini Burada Attık", reads "Here we laid the foundation of the Republic".

The building was used as the “National Struggle Headquarters” by the Representative Committee and Mustafa Kemal Atatürk.
The four-line inscription which states that the building was built on 5 October 1892 by Governor Mehmet Memduh Bey as a civilian school is now exhibited in the Sivas Museum. The building, which is an example of the 19th century late Ottoman period civilian architecture, is three-storey and has an inner courtyard. Stone on the exterior facade and timber was the main material used in the construction of the building.
Thirty-two delegates representing 19 provinces originally participated to the Sivas Congress. These numbers varied since delegates selected from other provinces subsequently joined the congress.
The historical Congress Hall and the study and rest room belonging to Atatürk are preserved as they were in those days.
In the above floor, a large room where pre-congress documents, the circulars and the notices of Mustafa Kemal Atatürk for the congress preparations were displayed. Also on the same floor, the most important thing of its time, the basis of the communications, the telegraph room; the room where the minutes of the congress are displayed; a large room where the announcements and the documents containing various news of the “Anatolian Women's Defense of the Country Society” that was established in Sivas and the copies of “The National Will” newspaper and its printing machine can be visited. All the documents relating to decisions taken during and after the Sivas Congress; the copies of Atatürk’s special archives at the Presidential Palace, the special archive of the attache’s and the Military History Commission of the General Staff Headquarters and the archives of the Directorate of the Atatürk Research Center are exhibited in the museum.
[Ministry of Culture and Tourism]

At the congress, Atatürk continued the struggle for national liberation which he started in Samsun Province on 19 May 1919. Leaving Amasya, he went to Sivas on 27 June, a city he called a “reliable city.” During the meeting in Sivas, the situation of the country was discussed and it was decided to hold a national congress in the city as soon as possible. Atatürk gave the directives about the Sivas Congress and went to Erzurum to gather a congress on 28 June. He came back to Sivas on 2 September and stayed there until 18 December.
A group under Atatürk’s leadership laid the basis of the foundation of the Republic of Turkey on 4 September 1919 in the building known today as Atatürk Congress and Ethnography Museum.
According to records, during the seven-day congress, various proposals were discussed for the liberation of the nation, and it ended on 11 September 1919 with the publication of a final declaration. “Either independence or death,” Atatürk said about the principles reached by the congress.
The concepts of national sovereignty and national will were accepted and began to be reflected in Turkish state life with the Sivas Congress, which Atatürk called the most important issue in his official correspondence from the moment he came to Samsun. The delegation became a first-degree body deciding the fate of the country, and the legitimate organs of the national movement were formed with the participation of newly elected members at the congress.
This movement led to a great victory on 9 September 1922 and was crowned with the proclamation of the Republic on 29 October 1923.
[Anadolu Agency, 4 September 2019]

The Republic University was established in 1973 as a Faculty of Medecine on the campus of Hacettepe University during the celebration of the 50th anniversary of the Turkish Republic, and relocated to Sivas in 1982.

The flag of CÜSEM (photo) is white with the center's emblem.

Sivas Chamber of Commerce and Industry

The flag of STSO (photo, photo) is white with the organization's emblem. The flag is also used with the emblem inscribed in a black circle (photo).

STB (website) was established by Order No. 6,118, issued on 1 February 1998 by the Ministry of Industry and Trade.

Sivasspor was originally formed in 1932, as Sivas Gençlik. The merger of Sivas Gençlik,Yolspor and Kızılırmak was eventually authorized to adopt the professional status in 1967. Sivasspor joined the First League in 2005, finishing 4th in 2008 and 2nd in 2009.

The flag of Sivasspor is white with the club's emblem in the middle (photo). The emblem of Sivasspor is a white shield charged with "SS", for "Sivasspor", and "1967", the year of foundation of the professional club, in red characters. The chief of the shield is red, inscribed with the club's name in white letters surmounted by three white stars, undoubtedly representing the three amateur clubs that merged to form Sivasspor.
The club also uses a flag diagonally divided red-white with the club's emblem in the middle (photo).

Jürgen Holz, a German living in Nuremberg, became such a great fan of Sivasspor that he was awarded the nickname of "German Yiğido", "Yiğido" being the club''s nickname. He eventually travelled to Sivas in November 2013, where he was warmly welcomed, and attended the match against Bursaspor, using a German-Turkish flag inscribed with "Yiğido" in white letters in the black stripe (photo).