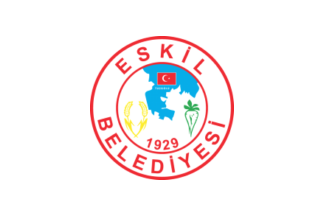 The former emblem of the municipality features a geographical map of Eskil, which is located on the southern shore of Lake Tuz (Salt Lake).
Lake Tuz is a UNESCO's Special Environmental Protection Area (SEPA), with the following description:

The Lake Tuz SEPA was declared by the Decision of Cabinet of Ministers numbered 2000/1381 dated 14.09.2000. The Lake Tuz protected area is within the borders of three provinces namely, Ankara, Konya, and Aksaray. The Lake Tuz is the second largest lake in Turkey after Lake Van which is mainly fed by underground water. Being a tectonic originated site, the area is located in a closed large basin called Konya basin. On the average, the depth of Lake Tuz is below 0.5 m., surrounded by Kızılırmak (East), Obruk (South), Cihanbeyli (West), Haymana (North) plateaus. The area is poor in inflowing rivers due to its location in the least rain fall receiving part of the country. The surface area of the lake reaches to 164 200 ha in spring. The altitude of the lake is 905 m. In summer, dry period dominates which results in the formation of a salt layer about 30 cm by means of excessive evaporation in the lake. It is one of the most salty lakes of the world as the density of water equals to 1-22.5 cm /g, i.e. salt ratio of 32.4%. This feature brings an economic value as well, of which 70% of salt used in Turkey is produced from Lake Salt.

The new emblem shows a complete map of Lake Tuz and two flamingos.
Aside from being known for its water naturally turning red due to algae, Lake Tuz is also known for its most prolific wildlife resident: flamingos. The lake "provides life to the largest flamingo colony in the Middle East and North Africa combined," Vice reports. Each year, thousands of greater flamingo chicks emerge from their nests by the lake. The greater flamingo is the most common species in the flamingo family. They breed in groups and travel in numbers, as protection from predators. Born grey, a flamingo's pink coloration is the eventual result of its diet of fish and other organisms that feed on plankton and, in Lake Tuz's case, "incredibly colored algae."
[Time, 28 June 2016] 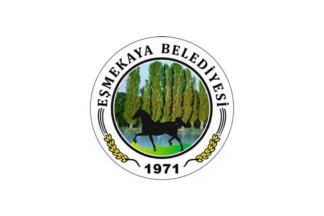 The flag of Eşmekaya (photo) is white with the municipality's emblem. "Belediyesi" means "Municipality".