Modeled on the state flag is that of Miami-Dade County (formerly simply Dade County). Note the saltire is of two colors: despite the poor lighting of the image (the sun was not out), the "bend dexter" limb of the saltire is green, not blue. The "bend sinister" limb is a lighter green. Nice effect, actually.
Al Kirsch, 7 March 2002 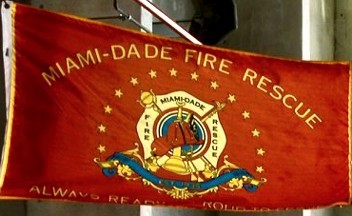