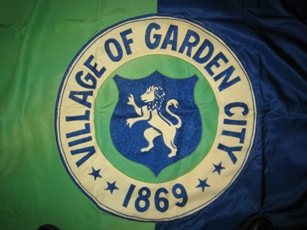 Centennial Celebrations: Origins of Garden City's Official Flag - Ses...
Description
"In a letter dated February 24, 1992, former Deputy Village Clerk Joan Gallaer shares information about the Incorporated Village of Garden City flag with an inquiring resident of Oakland, California. The letter states George Gray, a commercial artist who was active in the Garden City Jaycees, designed the Village of Garden City flag in connection with the Centennial celebration back in 1969. In August of that year, the Village Board of Trustees, under the helm of then Mayor Frederick H. Schneider, officially accepted the flag. It was designed at the request of the Centennial Committee. The official flag serves as more than just a symbol of the centennial. It prominently displays the Village lion seal on a blue and green background and the date 1869, the year the Village was founded. Stewart coat-of-arms, which includes it. One version of the seal is inlaid in the entrance to the Cathedral of the Incarnation, according to Mr. Bellmer. During the late summer and early fall of 1969, small flags were sold around town, suitable for attachment to auto antennas or as standing desk pennants. Proceeds benefitted the Garden City Public Library. More recently, the flags were prominently displayed on the St. Paul’s fields during the celebration of two momentous occasions in Garden City's history - the 150th anniversary of Alexander T. Stewart’s land purchase and the 100th anniversary of Garden City’s Community Agreement and its incorporation. Today, residents can see the flags flying along Seventh Street during the Friday Night promenades."
Valentin Poposki, 24 September 2019