The new Western Cape province (since 1994) is situated in south-west South Africa, reorganized from the southwestern part of the former Cape Province. It borders the  Northern Cape and Eastern Cape provinces.
Antonio Martins, 30 May 1999

Coat of Arms of the Western Cape 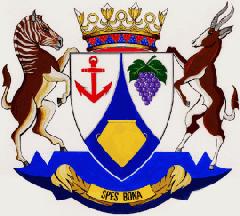 ARMS: Argent, on a pile embowed inverted throughout Azure, a Khoi clay pot with a conical base and two horizontally pierced lugs, Or, between in chief dexter an anchor Gules and sinister a bunch of grapes slipped and leaved proper; the shield ensigned of a coronet comprising a circlet Or, embellished of beadwork indented Gules and Azure heightened of six protea flowers Or, seeded Argent alternating with as many annulets, Or.
SUPPORTERS: Dexter a quagga (Equus quagga quagga) and sinister a bontebok (Damasileus dorcas dorcas) proper.
SPECIAL COMPARTEMENT: A stylized representation of Table Mountain Azure, bearing a riband with the fold-backs in the form of two ostrich feathers, Or.
MOTTO: SPES BONA.
Registered with the South African Bureau of Heraldry on 4 December 1998.
JJ Andersson, 05 May 2002

Franschhoek - municipal flag registered with the South African Bureau of Heraldry on 23 Sep 1999 and described as:
A rectangular flag, proportion 2:3, comprising three equal vertical bands of blue, white and red, charged on the white with an elephant statant proper.