The former flag of the Japanese Para-Sports Association was used as the flag of the 1964 Paralympics. The dove represents love and the formation of the wheels and spokes show the letter "V", the sign and call for victory. The rings/spokes also represent the people of the world. For the flag, this symbol is on a green background. This emblem was considered the first Paralympic Games logo. (Source)
Esteban Rivera, 22 January 2021 and Zachary Harden, 3 February 2021 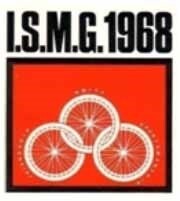 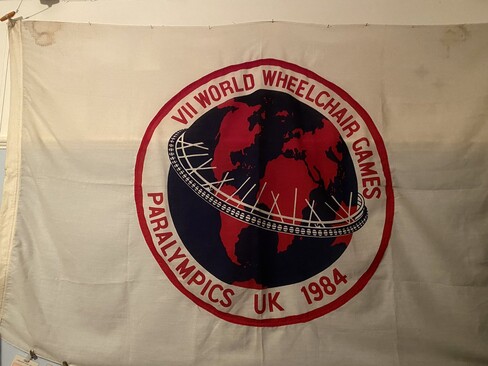 The 1984 Summer Paralympics saw two events taking place simultaneously in different places, New York City and Stoke Mandeville, with its respective logos. However, for the sake of continuation with the tradition of featuring the "wheelchair" logo on its flag, only the events held at Stoke Mandeville kept that tradition, before the appearance of an official standardized Paralympic logo being introduced.
Esteban Rivera, 22 January 2021

Dubbed "Sky, Earth and Human Beings," the emblem of the Beijing Paralympics is a stylized figure of an athlete in motion, implying the tremendous efforts a disabled person has to make in sports as well as in real life. With the unity and the harmony of "sky, earth and human beings," the emblem incorporates Chinese characters, calligraphy and the Paralympic spirit. It embodies the Paralympic motto of "Spirit in Motion" and reflects the integration of heart, body and spirit in human beings - the core of the philosophy of Chinese culture. The three colours in the emblem represent the sun (red), the sky (blue) and the earth (green).

Games of the XXIX Olympiad: Beijing Paralympics Emblem
From The official website of the BEIJING 2008 Olympic Games
8 Aug. 2008.

The first (known) use of joint Olympic and Paralympic events in a flag, was first mentioned here "Flags at London Olympics" in which the same flag portrays both, the 2012 Summer Olympics logo (the fuchsia logo version) on the left and the 2012 Summer Paralympics logo on the right, and below the inscription "host country of the Olympic and Paralympic games", as seen here: https://www.flickr.com/photos/ukinromania/6666060227/

Also important to notice is that "the London 2012 Games were the first time that the Paralympic logo did not include the letters "IPC". The removal of the letters was the only change. On the reverse side of the [flag] you see the image reversed too." 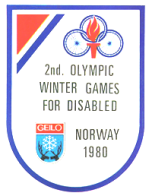 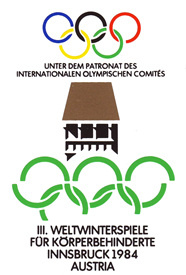 The logo for Innsbruck was a combination of three parts. The centre of the logo shows a stylised depiction of the Goldenes Dachl (Golden Roof) – one of Innsbruck’s most famous landmarks. Above this was the Olympic rings, which the IOC had agreed to the use of based upon certain conditions. Below the Golden Dachl was five broken rings aimed at depicting the disability of the participants taking part. It also contained the words ‘Under the patronage of the International Olympic Committee’ (originally in German) beneath the Olympic rings." (source)
Esteban Rivera, 22 January 2021

Unvielved in December 2017, the logos for both the 2022 Beijing Olympics and Paralympics were designed by Lin Cunzhen. The goal of both logos was to combine elements of Chinese history with the dynamic artisry of sport. For the Paralympics logo, it combines the Chinese character for "fly" along with an image that resembles a wheelchair athlete racing towards the finish line victory, a sprit that every Paralympian gives with every act, exciting the world while doing so. The design sent by Lin was one of 4,506 submissions from around the world and she also designed the logo for the 2014 Summer Youth Olympic Games held in Nanjing. As for the flag, like most Olympic and Paralympic flags before it, it is a logo on a white background.
Zachary Harden, 26 October 2020

Note, there was a branding change in 2020 with the IPC where the text "Paralympic Games" was dropped and the Agitos were updated, yet flags with the old logo are still present.
Zachary Harden, 9 August 2021