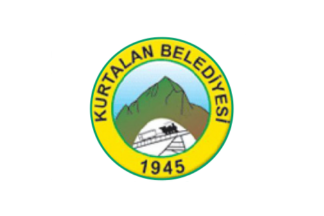 The flag of Kurtalan (photo) is white with the municipality's emblem. "Belediyesi" means "Municipality". 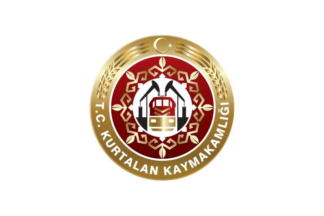 The pumpjacks refer to the Magrip oil field.
Reserves of high quality oil have been discovered in the Magrip field in the Turkish province of Siirt Kurtalan, Trend News agency reported referring to the Aksham newspaper.
Oil reserves were found at a depth of 2,000 metres as a result of exploratory works carried out on this field during the past two and a half months.
Currently, work defining the field's reserves is underway. If the supply of oil from the field is sufficient, the Turkish Petroleum Corporation (TPAO) will develop the Magrip field.
[AzerNews, 18 January 2013]

The locomotive refers to the Kurtalan railway station, which forms the eastern terminus of the Southern Express line (Ankara-Kurtalan, 1,212 km via Kayseri, Sivas, Malatya, Diyarbakır and Batman). Extension of the line to Siirt is planned.