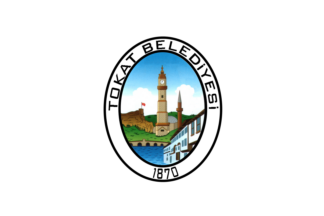 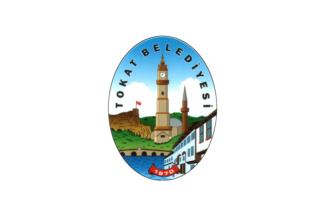 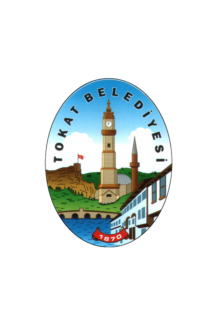 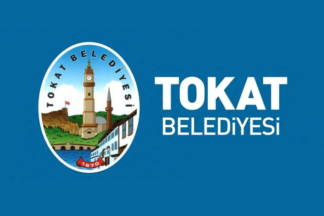 The flag of Tokat, used horizontally (photo, photo) or vertically (photo), is white with the municipality's emblem. The flag is also used with a blue background (photos). "Belediyesi" means "Municipality".
The emblem of the municipality depicts the local landscape, featuring Tokat castle built on the rock dominating the town and the town's clock tower.

The town of Tokat was conquered by the Seljuk Turks at the end of the 12th century and was incorporated into the Ottoman Empire in 1392. Tokat Castle, a ruined citadel also known as the fortress Dazimon, lies on the steep hills above the city. Prince Vlad III and his brother Radu are believed to have been held at the castle in 1442 by the Ottomans. Vlad, who was born between 1428 and 1431 in Sighişaora, Transylvania, is the prince who is the inspiration for Bram Stoker's 1897 gothic novel Dracula.
Archaeologists believe they have discovered dungeons, tunnels and a military shelter where Vlad the Impaler – who served as the inspiration for Bram Stoker's character Dracula – is believed to have been held hostage in the early 15th century. The find was made during restoration works at the castle, which uncovered a secret tunnel leading to the nearby Pervane Baths and a military shelter. Two dungeons were discovered, where Wallachian Prince Vlad III, known as Vlad the Impaler, is believed to have been kept captive by the Ottoman Turks.
[International Business Times, 29 September 2014]

The clock tower was commissioned by Governor Bekir Pasha and Mayor Mütevellioğlu Enver Bey for the 25th anniversary of the crowning of Sultan Abdul Hamid II. The tower, which is approximately 33 m in height, is located in the neighborhood of Behzat.

The flag of the Tokat City Council (photo) is white with the council's emblem. "Kent Konseyi" means "City Council".

The flag of Çamlıbel (photo) is white with the municipality's emblem. "Belediyesi" means "Municipality". 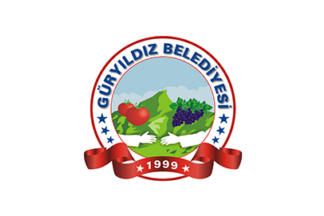 The flag of Güryıldız (photo is white with the municipality's emblem. "Belediyesi" means "Municipality".

Gazi Osman Pasha University, established in Tokat on 3 July 1992, is named for field marshal Gazi Osman Pasha (Osman Nuri Pasha, 1832-1900), who heroically led the defense of Plevna (now the town of Pleven, Bulgaria), during the Russo-Turkish War (1876-1877).
Osman Pasha surrendered on 10 December 1977 after a five-month siege. Although the Ottomans were defeated, the long siege delayed the Russian advance and prevented an attack of Constantinople. As a tribute to his courage, Osman Pasha was awarded the title of "Gazi" (lit., "warrior" or "veteran", subsequently awarded to Mustafa Kemal Atatürk). The siege is also commemorated by the Plevna / Osman Pasha March.

The emblem was designed in 1992 by Alper Bay, winner of a public contest. It features a stylized yellow tree shaped like letters "G O P", for Gazi Osman Pasha, symbolizing the Ottoman civilization. The tree is rooted in a red river, representing Danube shed by the Plevna martyrs.
The emblem stirred up a sour controversy in 2005. A lecturer in the Arts Department of the university presented a report stating that the emblem was graphically inappropriate, being difficult to reproduce and including too many colors. Accordingly, he proposed to remove the representation of the Danube, claiming that a bloody element was not appropriate on the symbol of a university; he pointed out that the Çanakkale 18 March University, also connected to heroic war acts, did not use any bloody element on its emblem. The rector decided that the emblem should be changed; following a public contest, 24 proposals were featured on the university's website. This triggered virulent reactions in the nationalist and conservative circles, so that the rector eventually withdrew his decision to change the emblem.
[ Mermurla, 5 November 2005]

Tokat Chamber of Commerce and Industry

Flag of the Tokat Chamber of Commerce and Industry - Image by Ivan Sache, 4 September 2019