Below is a series of images of flags that have been provided to FOTW; some we have recognized, and some we have been unable to recognize. If you can help us identify any of these flags, please let us know! Contact the: UFE Editor. 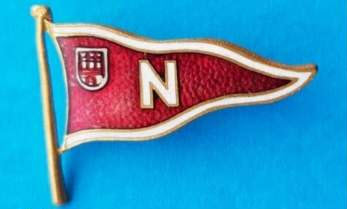 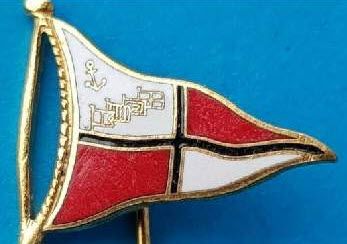 Found these on eBAY, I guess the sellers had no idea what they are.
1) Image #1a is related to Hamburg and denoted by the seller as rowing or sailing club. The "N" might be "Norderelbe", "Niederelbe" or something else.
2) Image #1b shows in the canton an anchor in bend and signal flags, probably "AGWR", not very likely "AGWX"".
Can anybody help?
Klaus-Michael Schneider, 12 January 2021 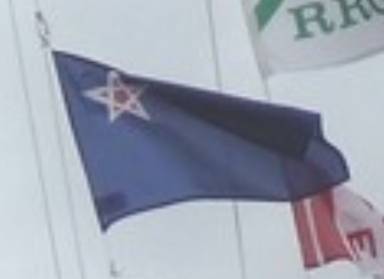 The flag is blue with a white (or yellow) pentagramma in hoist. The flag was hoisted together with those of many other (German) rowing clubs on the flag pole of WSV Rinteln on occasion of its 50-years anniversary. Maybe it belongs to a foreign rowing club? Can anybody assist?
Klaus-Michael Schneider, 13 January 2021 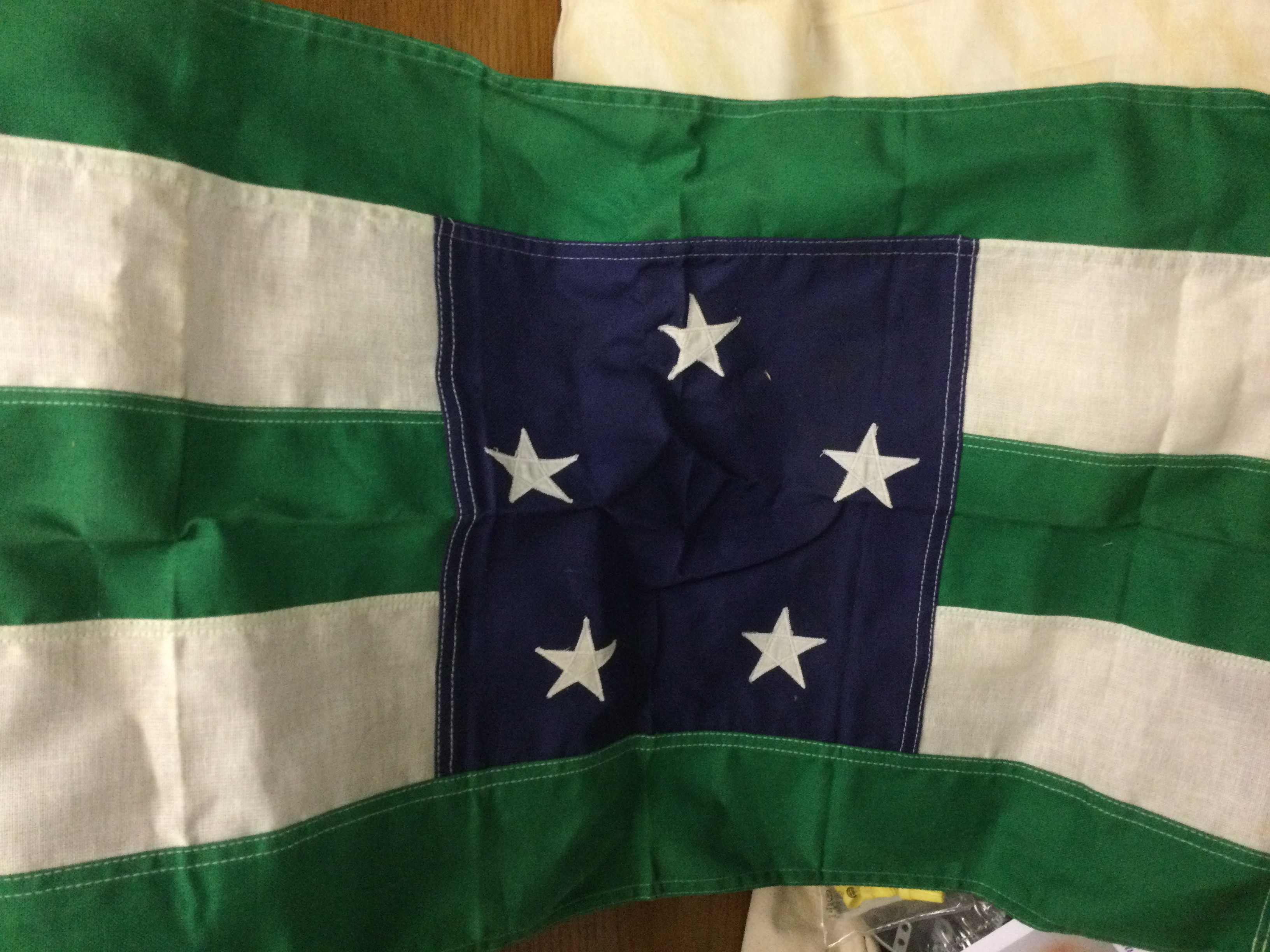 I'm not even sure which way is up... It looks to be a little hour-glass shaped? It did make me think a little of the NYC Police Flag and the speculative Tsakhur People's Flag.
Some similar color and design elements, but they aren't a very close match. Where did you find it if I might ask?
Pete Loeser, 21 January 2021

It was sent to me. It is cotton, 3'x5' and was made by Annin. My thoughts were similar, either NYCPD or a Brazillian state.
Jim Ferrigan, 22 January 2021

21-4. Unidentified Flag in a Painting. 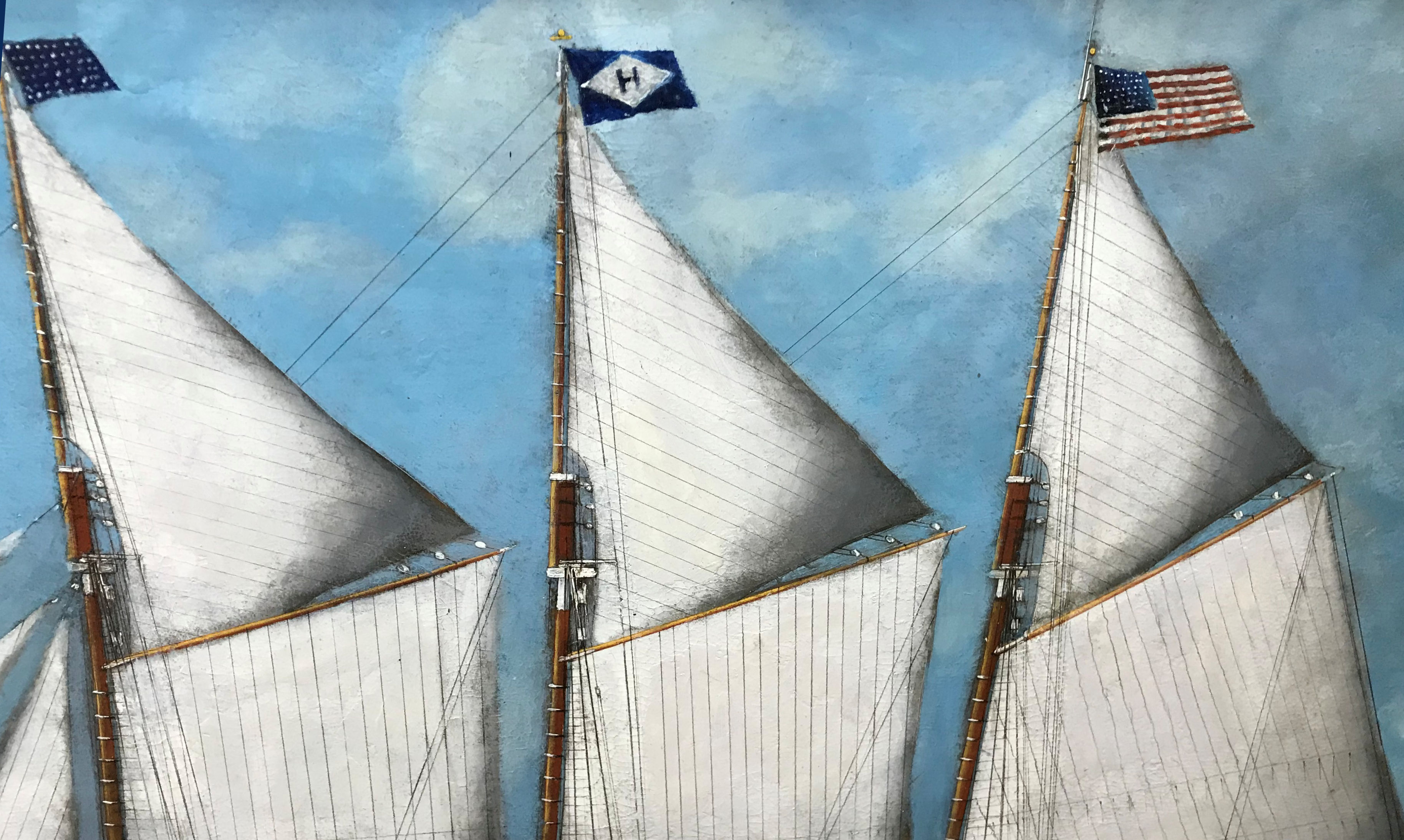 I am the librarian at the St. Augustine Historical Society Research Library and the Society recently received an unidentified painting of a ship with three flags on it. One is the US flag, and the other two are unknown. A volunteer suggested that the blue flag with stars might be a naval ensign. The third flag is blue with a white diamond and within the diamond is the letter H. A copy of the painting is attached. Any assistance you or your readers can provide is welcome.
Bob Nawrocki, Chief Librarian, St. Augustine Historical Society Research Library, 19 January 2021

The one on the left appears to be a standard 48-star Naval Jack flown by US Navy ships between the years of 1912-1959. That could help date the ship, or the painting itself. However, I am not familiar with an American shipping company with a house flag like the one shown. It does, however, look like the flag of Oy Hacklin, Ltd. of Finland. But the combination of these three flags is a strange one to me. Hopefully one of our naval experts can unravel this one.
Pete Loeser, 28 January 2021

I couldn't find anything about Akademische Ruderverbindung Karlsruhe. Thus Leipzig and Köln are my favorites. The others could be identified either by their coat of arms, called Panier, or we had it already in our German Rowing Clubs pages.
Klaus-Michael Schneider, 23 January 2021 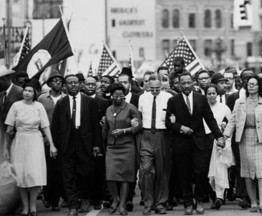 I came across a flag I can't seem to identify, and I can't find it listed on your site. The flag in question (to the left behind Ralph Abernathy) seems to have been present at the 1965 Selma to Montgomery marches. It has a solid background, with some sort of unidentified symbol in a white circle in the center, possibly with writing around the edges. It appears in a few photos of the marches, but unfortunately, the one linked above seems to be the best image available. I can't find any record of a similar flag being associated with any of the groups involved in the march either. I was wondering if you might have any details about this flag, or any information that might help identify it.
Source: Photo by Bruce Davidson- Time of Change-1965 (image)
Calvin Kenney, 5 February 2021 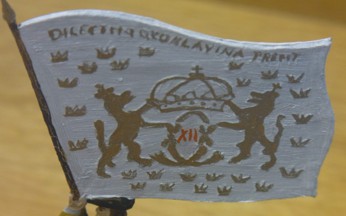 The flag is probably a Swedish colonel's colour (Leibfahne) due to its white colour. The inscription on top is unfortunately hard to read. The number in centre is probably related to Swedish King Carl XII, also being Duke of zweibrücken, and the flag thus probably from the Great Nordic War. The ensigns uniform and the type of head also seems to be Swedish. Can anybody assist
Klaus-Michael Schneider, 6 February 2021

The pennant is parted of yellow and red with a black steering wheel shifted to hoist, I guess either a shipping company or a yacht club pennant. Can anybody assist?
Klaus-Michael Schneider, 6 February 2021 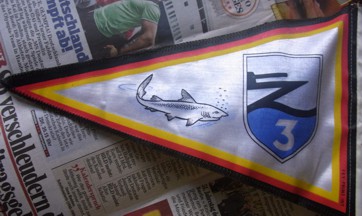 The pennant is white with a bordure of German Colours black-red-golden, charged with a badge at hoist, displaying a white no.3 on a blue wave, above a silhouette of a black ship's prow with a gun, a fly an embowed shark. I guess, it is a ship flag.
Klaus-Michael Schneider, 6 February 2021

This shows at hoist site the badge of the former German Navy Destroyer Z3. The badge can be found on several sites including offers of the badge on eBay and here on Amazon. I did not found an explanation for the whole flag - might be of a special operation or maneuver.... with some sort of fish-name.
Andreas Bühne, 13 March 2021

Based on Andreas's information, I found this coat of arms/plaque of the Bundesmarine Max Schultz Destroyer Z3 on eBay (source). However a second source, see German Navy Coat of Arms for the Z3, led me further down a rabbit hole.
I found that the original Max Schultz that Andreas had located sunk in mid-February of 1940 while proceeding into the North Sea to search for British fishing trawlers. One of her sisters, the Z1 Leberecht Maass, was bombed and sunk by a patrolling bomber. While trying to rescue survivors, the original Max Schultz struck a British mine and sank with all hands. (source). The pennant didn't look that old.
I then discovered in 1959 an American Fletcher-class destroyer named the USS Wadsworth (DD-516) was turned over to West Germany and went into the Federal Republic of Germany's Service as, you guessed it, a new Z3. For the next 20 years or so it served in the German navy before it changed hands again in October of 1980. It was renamed the Nearchos where it served until 1991 in the Hellenic Navy, then decommissioned and sold for scrap.
So this doesn't completely identify this pennant, but based on its good condition it seems to me that perhaps this was from the time period of 1959-1980, and the second German Z3. I leave it up to you naval experts to unravel the whole tale.
Pete Loeser 13 March 2021. 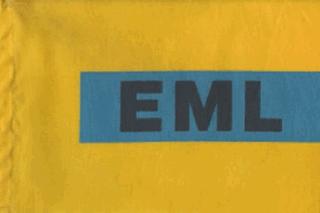 My website presents the collection of flags related to marine business that I inherited from my father. Although he had a bibliothek of more than 1000 books there are some flags he could not identify.
I don't know anything about the origin of the attached flag. Neither the country, nor the company. According to "flagpole.de" and Josef Nüsse this flag might be of Ems Middle East Line, Rotterdam. My father doubted this, but could not find other references.
Andreas Bühne, 10 March 2021 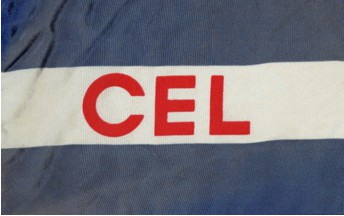 I don't know anything about the origin of this second attached flag. Neither the country, nor the company. I have researched on the internet without results.
Andreas Bühne, 10 March 2021

Is it possible that you mention the specific source for this flag? That is: the book and/or publication, its author, date, and every other detail that might be useful in tracing this item, such as place of origin, etc.
Esteban Rivera, 10 March 2021

Unfortunately I don't know anything about the flag. When my father died I inherited a collection of more than 3,200 flags of shipping companies, shipyards and many other branches related to ships in some way.
My father already spent a lot of time with his books and he tried to find answers on the internet, but he did not note where he received the flags from. So I have nothing more than the table-flag, sized 25 x 15 cm.
Andreas Bühne, 10 March 2021

I believe it might be the flag of the Catskill Evening Line, an American company.
Dominique Cureau, 10 March 2021

Although the CEL lettering is correct (minus the periods) and the colors (while the same) are reversed between this flag and our existing CEL drawing, so I'd have to make this identification only a Tentative ID for the time being. I think we will have to dig a little deeper.
Pete Loeser, 13 March 2021

This flag has been positively identified and is now located here.